The actor recorded himself in his trailer as he showed his followers various items including a coffee mug, a bottle of dish soap and a paper straw

Chris Pratt is keeping himself entertained while waiting to begin work on his new series.

On Monday, the actor, 41, recorded a series of videos of himself "going crazy" while in his trailer on the set of his upcoming Amazon series The Terminal List.

In the videos, which Pratt posted to his Instagram Stories, the actor, dressed in full costume for his role as Navy SEAL James Reece, shows off random items scattered around his trailer.

"Literally this. Literally," Pratt says, turning his empty coffee mug to the camera.

The actor then begins to sing Nina Simone's "Feeling Good" in a low voice before turning the camera to a bottle of Dawn dish soap.

The Guardians of the Galaxy star then goes on to share his thoughts on paper straws and jokes about why they are beneficial for sea turtles.

"Hey Chris Pratt here just going crazy in my trailer waiting to go to work and I just want to let you know that I care about sea turtles," he says, holding the straw up to the screen. "See this straw — it's made out of paper 'cuz I know that sea turtles are constantly trying to do cocaine."

Back in December, Schwarzenegger Pratt shared glimpses from a sunny, "quiet" beach outing she and Pratt enjoyed along with their infant daughter. The couple posed for a selfie together in one photo, with the baby girl's head slightly visible, wearing an adorable white hat.

Another snapshot showed Schwarzenegger Pratt, 31, with Lyla in a carrier on her chest, smiling for the camera on the shore.

"Closing out 2020 with a quiet beach walk (and a first beach experience for one of us ) 💫," she captioned the Instagram post. 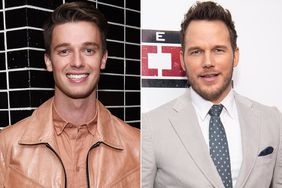