Chris Hemsworth first portrayed Thor 10 years ago in 2011 and he recently wrapped production on the upcoming fourth standalone Thor: Love and Thunder

The actor, 38, appeared on the Australian morning show Today earlier this week, when he was asked about whether he'll continue to play the God of Thunder following the July 2022 debut of Thor: Love and Thunder after Tom Holland signed on to do three more Spider-Man films.

"How many Spider-Mans has he done? He's a little behind me. I think he's done three, I've done six or seven Thors? So maybe. As long as they'll have me, I'll turn up," Hemsworth said. "But I feel like there might be waning, that kind of enthusiasm for me."

The Today co-hosts said "absolutely not" to his theory, to which he said with a smile, "Thank you. That's the Australian sort of support chain, though. Internationally they might be going, 'Get rid of him. Get someone else.'"

When he marked the end of filming the upcoming Thor movie, Hemsworth wrote on Instagram about what fans should expect from the sequel, which is directed by Taika Waititi.

"That's a wrap on Thor Love and Thunder, it's also national don't flex day so I thought this super relaxed photo was appropriate," he joked at the time. "The film is gonna be bats--- crazy off the wall funny and might also pull a heart string or two. Lots of love, lots of thunder! Thank you to all the cast and crew who made this another incredible Marvel journey. Buckle in, get ready and see ya in cinemas!!"

Earlier this year was 10 years since the world was first introduced to Hemsworth as Thor and Tom Hiddleston as Loki in the Marvel Cinematic Universe.

Hemsworth commemorated the anniversary with a photo of himself and his costar dressed in red and green, just like their warring-brother characters in 2011's Thor and subsequent Avengers films. Alongside the throwback snapshot of the now-superstar actors, Hemsworth included an image of a 2009 Vulture article with the headline: "Marvel Rolls Dice, Casts No-names for Thor."

"This year marks the 10th anniversary of THOR when two unknown lads were given the keys to the kingdom," the actor wrote, joking in conclusion, "It's been a hell of a ride and we clearly haven't aged a day." 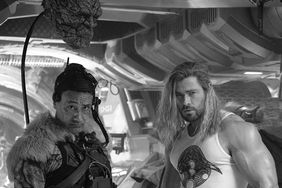