"Half of the time I was improving opposite nothing," tha actress said

Chloë Grace Moretz is grateful for her experience working on Tom and Jerry.

On Wednesday, the 24-year-old actress appeared virtually on Watch What Happens Live with Andy Cohen to promote the upcoming family film, and revealed that working on the animated/live-action hybrid has made her a better actor.

"It was so strange. I definitely think I'm a better actor now after doing that project. Half of the time I was improving opposite nothing because they're silent characters," she explained. "I'd imagine in my head what they're improving back and then continue forward in the scene. So it was definitely a brain twister."

In the film, Moretz stars as Kayla, a wedding planner who hires Tom to capture Jerry and get rid of him after he makes New York City's finest hotel his new home on the eve of an important wedding.

In November, the actress told PEOPLE she had "so much fun" while working on the movie.

"I loved that she was a lot like Jerry," Moretz said of playing Kayla. "She was a girl who gunned for what she wanted to achieve but realizes that time and honesty is what will prevail in the end."

Describing her character as "a total goofball which isn't unlike myself," Moretz said the film offered her an opportunity to "lean into who I am in real life" as a comedic actress.

She also admitted at the time that "the biggest challenge was working opposite nothing being there."

"Tom was a stick with a name tag (seriously) and for Jerry at least I had a little to scale model of him," she recalled. "All in all it was very interesting to be able to improv opposite nothing and create with the animators and push the boundaries of what we could achieve."

This is the first theatrically released film featuring Tom and Jerry since the 1992 film Tom and Jerry: The Movie. It is directed by Tim Story (director of 2005's Fantastic Four, Think Like a Man and Barbershop) and also stars Colin Jost, Ken Jeong, Michael Peña, and Rob Delaney.

Tom and Jerry opens in theaters this Friday, Feb. 26. 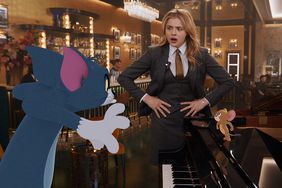