Cash Warren has apparently started 2016 off on the wrong foot!

The producer was spotted wearing a cast on his leg and using crutches to walk in Los Angeles on Monday.

Despite his injury, Warren appeared to be in good spirits, and brightened up his cast with a colorfully patterned sock from his Pair of Thieves line.

Warren, 36, who has two daughters with wife Jessica Alba, took to Instagram on Monday to explain his injury.

“Didn’t expect to be starting 2016 with a torn achilles but that’s the hand life deals you sometimes. Can’t wait to get back on my feet like coach @wkwesi … Thanks for the rad pic!” he captioned a picture of another Instagram user sporting Pair of Thieves socks on the Great Wall of China.

Other than that torn Achilles tendon, Warren’s 2016 looks good so far.

Alba posted a sweet family photo with Warren and daughters Honor, 7, and Haven, 4, on her own Instagram last week, wishing everybody a “happy new year from our family to yours.” 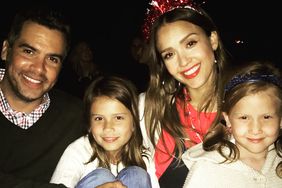