Carol Lynley, Star of 'The Poseidon Adventure' and Former Girlfriend to David Frost, Dies at 77

Carol Lynley, best known for the 1972 disaster movie The Poseidon Adventure, has died. She was 77.

The actress, who was born in New York City, died “peacefully in her sleep” at her Pacific Palisades home on Tuesday, PEOPLE confirms.

Her daughter, Jill Selsman, tells PEOPLE in a statement the actress “loved the industry and she was equally a great fan of the movies.”

“She loved working in film as much as she loved going to the movies. I saw everything as a child with her,” Selsman, a director, said of her mother’s love for film and television.

She continued, “She was curious about the world around her, loved to spend time with interesting people, of all stripes and was generally a very peaceful person. Very live and let live.”

Lynley was also a “life-long fitness person” and a yoga practitioner since the 1970s “when everyone still made fun of it,” Selsman said of her mother.

“She loved to dance, going to the ballet, seeing anything on Broadway. I basically lived at Lincoln Center as a child because of her,” Selsman said. “She had an easy approach to life and always took the good with the bad. She was a bon vivant. There really was no situation that couldn’t be improved or ignored because there really was so much fun to be had, why dwell on things you can’t change.”

“Which is what I think she’s doing now. Clearly, you can’t change death, but if there is a world beyond, she’s dancing with her great friend Fred Astaire and enjoying her new life as much as she enjoyed her previous one,” Selsman said.

Lynley began her career as a child model and later pursued acting after appearing on the 1957 cover of LIFE magazine at the age of 15.

The actress turned heads in the controversial 1959 drama Blue Denim in which she and costar Brandon deWilde play two teenagers who deal with an unwanted pregnancy and pursue abortion, which was illegal at the time.

She followed that role with parts in Return to Peyton Place, Under the Yum Yum Tree, Bunny Lake Is Missing, The Pleasure Seekers, The Cardinal and The Poseidon Adventure.

She performed the Oscar-winning song “The Morning After” in The Poseidon Adventure (however, her singing voice was dubbed over by Renee Armand).

In 1960, Lynley married publicist Michael Selsman. The two had one child, daughter Jill, before divorcing in 1964.

A year later, the actress posed nude for Playboy.

Lynley spoke to PEOPLE in November 1994, saying she’d been asked to write an autobiography, although she’d resisted.

While Lynley didn’t live the wild Hollywood life of so many of her contemporaries, she did have an 18-year, on-again, off-again relationship with British talk show host David Frost.

The actress shied away from commenting on their relationship, but did say she was in a period of “transition.”

“I’m playing middle-aged parts, which is a good idea!” she said. “Eventually, I want to make the next transition, to where I’m playing snowy-haired old ladies, my Helen Hayes period.”

Lynley’s last film role was in Sylvester Stallone’s 2006 short-film Vic, which was co-written and directed by Stallone’s late son, Sage. 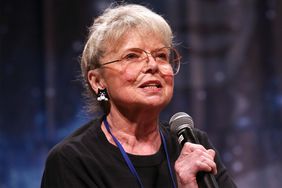