Cardi B has joined the Fast family!

Fast and Furious star Vin Diesel shared an Instagram video on Tuesday revealing that the rapper, 27, has been cast in the ninth installment of the franchise. Cardi has a small, still-undisclosed role in the film, Entertainment Weekly reported. A rep for the rapper did not immediately respond to PEOPLE’s request for comment.

“Day 86 here on the set of Fast 9,” Diesel says in the video. “I know I’m exhausted. I literally — we all gave every single thing we could for this movie. Put it all on the table. Put it all out there.”

“I’m tired,” Cardi adds in agreement. “But I can’t wait. I ain’t gonna front, I think this is gonna be the best one.”

“We’re so blessed,” Diesel says. “The last day of filming in the U.K. All love always.”

Everything You Need to Know About Rhythm + Flow, the Netflix Rap Show People Are Obsessed With

The “Press” singer has yet to address her latest role on her own social media, but three days ago shared a photo of herself and husband Offset with the caption, “miss you babestar” — which she could have posted while on the U.K. set for Fast 9.

Earlier this month, Cardi teased that she would be taking on another film project, telling Ellen DeGeneres on her talk show that she “enjoy[s] the checks.”

“I couldn’t believe I was on set for 16 hours,” the “I Like It” singer said of the hard work that goes into movie making. “It’s like, ‘Is this what actors and actresses gotta go through?’”

“Artists, we have long days but it’s just full of excitement. We move around, we doin’ something,” she continued, noting how different acting is from music. “[Acting], you like, you gotta wait on the trailer until it’s your turn. You gotta do the same scene 20 times.”

Cardi B Reveals She’s Making Another Movie After Hustlers ‘This Month’: ‘I Enjoy the Checks’

This isn’t Cardi’s only new project.

The mother of one is one of the hosts of Netflix’s new music competition show, Rhythm + Flow, along with T.I. and Chance the Rapper.

She’s become known for her zingers when judging contestants on the show, saying in one clip, “They pay me to be mean, you know.”

“You really surprised me because you look like you work at Best Buy,” she tells one hopeful contestant in a compilation clip released by Netflix. She tells another, “You’re not going to L.A. You can go to Jersey.” 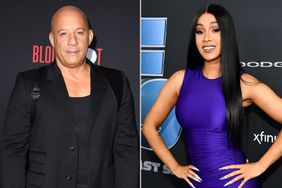