Cara Delevingne Fires Back at 'Game of Thrones' ' Richard Madden for Calling Her 'Ungrateful': 'It's a Little Desperate'

Do not mess with Cara Delevingne – even if you star on one of the biggest TV shows on the planet.

Game of Thrones star Richard Madden (A.K.A. Robb Stark) learned that lesson after Delevingne fired back at him on Twitter Tuesday for calling her “unprofessional” and “ungrateful” in a recent interview.

“I have no idea who you are but I think it’s little desperate for a grown man to be bad mouthing someone they don’t know,” the 23-year-old model wrote to Madden on Twitter.

In an interview with Britain’s Style magazine, Madden reportedly said that Delevingne’s behavior during her now-infamous interview with Good Day Sacramento anchors earlier this summer made her seem unappreciative.

“It was unprofessional,” Madden, who recently appeared onscreen as the Prince in the live-action version of Cinderella, reportedly said. “It made her seem ungrateful. She showed her age. For Cinderella, I did six weeks of those interviews, where you get asked the same eight questions.”

Madden added that if Delevingne is incapable of doing press “gracefully,” she just shouldn’t.

“If you really want attention that badly, try focusing on your own work and not other people’s,” Delevingne also Tweeted at Madden on Tuesday.

The 29-year-old actor eventually responded to the Paper Towns star, tweeting, “Hi @Caradelevingne, nothing but respect for you. Misquoted and blown out of proportion. #SlowNewsWeek.”

The Sacramento incident, which featured the show’s anchors calling Delevingne “irritated” and criticizing her lack of “oomph” on the air, isn’t the first run-in the star’s had surrounding press etiquette.

Vogue writer Plum Sykes said that Delevingne overslept not once, but twice, during their 2014 interview.

“Dear reader, to misquote Oscar Wilde, can I say that to oversleep once for a Vogue interview may be regarded as a misfortune, but to oversleep twice looks like carelessness?” Sykes wrote in the piece. 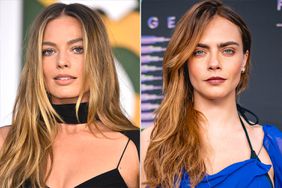