Moretz celebrated her milestone birthday over the weekend with cake, selfies and famous friends

“Happy birthday baby,” he wrote. “Love you to the moon and back xx.”

In the black-and-white photo, Moretz is seen giving Beckham, 18, a soft smile as she chats on her phone.

The actress celebrated her 21st birthday on Sunday.

And while the romantic message may come a few days late, the romantic snap is not out of character for Beckham, who regularly posts photos of his Moretz on social media.

Moretz celebrated her milestone birthday over the weekend with cake, selfies and famous friends. The Neighbors 2: Sorority Rising star rang in the occasion at Beauty & Essex Los Angeles in a private dining area decorated with Earthbaby Flowers and balloons bearing the actress’s name.

Although Moretz and Beckham have officially reunited, in an interview with Australian lifestyle magazine Stellar, Moretz revealed that she struggled after the couple split in September 2016.

“I went through a hard year and I’m not going to hide that,” the actress said. “I had to deal with this new level of fame while I was growing up, I was getting out of a relationship and all of it was very public. I wanted to hide.”

PEOPLE confirmed in August that Beckham and Moretz were “hanging out” again and in September, the couple made things official after stepping out together wearing coordinating denim looks.

Moretz later told PEOPLE that their short time apart only strengthened their relationship. “I think we chose each other. I think we really understand each other,” she told reporters. “It’s been years now, off and on, and it’s just one of those things where you come back and it’s like no time was spent away from each other at all and that’s the most important thing.” 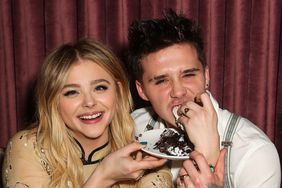