Sean and Jayden appear in 'Ooh La La,' from the The Smurfs 2 soundtrack

Britney Spears has one more reason to be proud of her sons.

Sean Preston, 7, and Jayden, 6, made their music video debut on Vevo Thursday with Spears, 31, in “Ooh La La,” her single from The Smurfs 2 soundtrack.

In the video, Spears is at the movies with her sons when the pop star suddenly disappears in a blue flash of light and then appears on big screen. The boys are excited, smiling and pointing at the screen. “Cool,” they say in unison. Then, “Hi, Mom!”

Spears debuted her single on Ryan Seacrest‘s radio show on June 17, telling the host that her boys “were really, really good on set,” adding, “They were, like, acting, and my oldest son, Preston, was right on cue every time they would tell him to do something. Later on, I got to see what they actually did on camera and it was adorable.”

She also said her kids are “obsessed” with the classic cartoon characters, telling Seacrest, “We’ve seen the Smurfs movie a million trillion times.”

On Monday evening, the pop star posted a photo with her two boys at a movie theater on her Instagram account to tease the music video.

PHOTOS: Celeb Kids: All Grown Up!

“Omg. How CUTE are my boys?!” she wrote in the caption.

The wait is over. And the boys are as cute as can be. Check out the video for “Ooh LaLa” here: 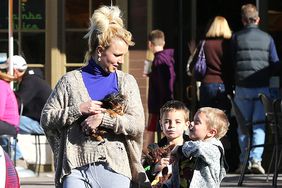 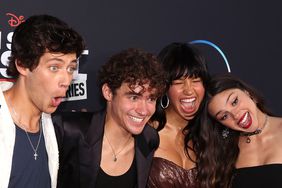