Brad Pitt is firing up some serious star power.

The actor was in high spirits while attending the London premiere of his World War II spy drama Allied on Monday night.

Stepping onto the red carpet on a typically damp British night, the actor spent 45 minutes laughing, joking and waving to the crowd, before breaking into a broad smile during a red carpet interview about the movie — which harks back to the golden age of Hollywood movies such as Casablanca and The Maltese Falcon.

“They shot most of it on a soundstage, but using all the new technology we have today,” Pitt, 52, told the audience at London’s Leicester Square. “So you don’t know if we are on location or not. A lot of times we were just sitting in cars, you know, with the film screen rolling behind us.

“The hours were shorter. The travel was shorter. But it was really good fun to try something like that,” he added.

Pitt then broke into a broad smirk as he was told that costar Marion Cotillard — whom he described as “a gem” and “one of France’s national treasures” — had praised his French accent in the film, he asked with a laugh, “Did she? She usually crushes me. She kills me!”

Adopting a slightly more serious tone, Cotillard, 41, added that to her, the movie was like “diving, in a way, into my childhood dreams” because it reflected so many “American movies from the ’40s and ’50s” she had grown up watching as a child.

She also revealed that she and Pitt had become friends during filming simply because of the way it was put together. “We had the chance to work for almost three weeks together before we started shooting,” said Cotillard. “It is something that is really amazing and is not that common, to have this period of time where we get to know each other and we get to talk about the script a lot and share our thoughts and to get to know each other. That was very special.”

Monday was the second night in a row that Cotillard and Pitt hit a European red carpet together. On Sunday, the pair made a stop in Paris, where Pitt was in an equally playful mood.

Telling reporters he was intrigued by the film’s plot – which details a couple’s intensely stressful marriage – Pitt said, “I got really intrigued by this idea of a couple and trust and trusting your instinct, trusting each other, trusting the mission and here we are.”

The actor’s good spirits come after months of keeping a low profile following his divorce from Angelina Jolie.

Pitt and Cotillard now move onto Madrid for the Spanish premiere of the movie, which hits theaters Nov. 23. 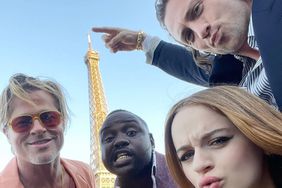