Brad Pitt celebrated the holidays spending some quality time with his family.

A source tells PEOPLE the 55-year-old actor and several of his children “spent a low-key Christmas together and everything went as expected.”

Pitt and Jolie have reached a temporary child custody agreement two years after they announced their separation. The two first met on the set of their 2005 thriller Mr. & Mrs. Smith. They married in 2014, but Jolie filed for divorce in September 2016, citing irreconcilable differences.

A source previously told PEOPLE, “It is not permanent but rather a temporary agreement in place, for now, to keep things moving along in the right direction.”

The Once Upon a Time in Hollywood actor also spent his 55th birthday with his kids earlier this month. A source told PEOPLE at the time that several of his children slept over at his home in Los Angeles the night before his birthday.

Pitt’s family time comes amid a successful time for Pitt, who recently wrapped production on Quentin Tarantino’s Once Upon a Time in Hollywood alongside Leonardo DiCaprio.

The movie stars the duo, in their first time together onscreen, as friends who are witnessing Hollywood change around them during the time of the Charles Manson murders in the late 1960s.

Pitt’s production company Plan B is also racking up awards nominations. The Pitt-produced Vice, If Beale Street Could Talk and Beautiful Boy have all earned nods in various categories for the upcoming Golden Globe and Screen Actors Guild Awards, with Vice leading all nominations at the Globes. 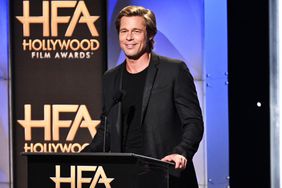