The Jolie-Pitt women came to see the zombies on the set where World War Z is filming, with Daddy – Brad Pitt – as the star.

The 90-minute visit to the location in the narrow historic district occurred during Pitt’s lunch break. He was seen holding Zahara’s hand while showing her around St. Anne’s Street while Angelina kept rein on Shiloh.

The two girls were later spotted walking around the post-apocalyptic set on St. Dominic Street with Dad – again showing the start of a beard and wearing his screen costume of a dark blue shirt and futuristic khakis.

About 300 extras – portraying zombies, Israelis and Palestinians – were at work before the cameras Tuesday. Filming of World War Z, which Pitt is producing and Marc Forster is directing (based on a book by Max Brooks, the son of Mel Brooks and Anne Bancroft), moves to Glasgow, Scotland, later this summer. 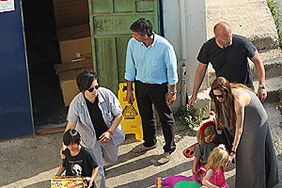 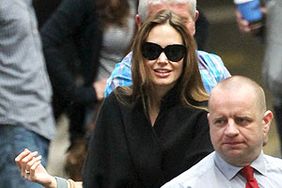