Jennifer Lopez and Ben Affleck "held hands under the table" during the outing at Nobu in Malibu, California, a source tells PEOPLE — and shared a kiss

Ben Affleck is getting acquainted with Jennifer Lopez's 13-year-old twins, Max and Emme.

On Sunday, the couple were joined by Lopez's son and daughter (whom she shares with ex-husband Marc Anthony) and her sister, Lynda Lopez, for a dinner celebrating the latter's birthday at Nobu in Malibu, California.

"They enjoyed a Sunday family dinner together," a Nobu source tells PEOPLE of the "small birthday celebration," where "everyone seemed great and had fun."

"Jen and Ben sat next to each other and were very affectionate," the insider adds. "They held hands under the table." (They were also photographed sharing a smooch at the table.)

As for Max and Emme's relationship with their mom's actor beau, "Ben and her kids seemed comfortable together," the source says. "The kids kept chatting with Ben. Ben seemed great. He was smiling and laughing. They ordered a lot of food to share. Ben had a Diet Coke."

The outing came as Affleck, 48, also spent time with his own family over the weekend, celebrating his kids' graduations. The Oscar winner is father to three children with ex-wife Jennifer Garner: daughters Seraphina, 12, and Violet, 15, plus son Samuel, 9.

A source told PEOPLE on Saturday that Affleck and Lopez, 51, had reunited in Los Angeles the previous day after some brief time apart from one another — and it has seemingly been all about family as of late.

Affleck spent time bonding with Lopez's mom Guadalupe Rodríguez earlier in the week when the Justice League star was seen directing an undisclosed project in Las Vegas that featured Rodríguez, 76, on the set. A source previously told PEOPLE that "Lupe was there to film a fun cameo."

"In the past, Jennifer's mom and Ben were very close. Guadalupe loved Ben. She was sad when they couldn't work things out years ago," an insider told PEOPLE over the weekend. "She is thrilled that they are back together now."

"Jennifer is very close with her mom. It's very important to her that the person she is with, gets along with her mom," the latter source added. "Jennifer loves that Ben and Guadalupe hung out in Las Vegas. They both love gambling and had fun together at the Wynn hotel."

RELATED VIDEO: Ben Affleck and Jennifer Lopez See Each Other After Her Split: "They Have Always Been Friends"

Rumors of Lopez and Affleck's rekindled relationship first ignited in late April, when they were spotted outside her L.A. home following her split from Alex Rodriguez. The two later enjoyed a getaway to Montana, where they were photographed driving together on May 8.

Since then, the previously engaged pair have been seeing each other in Los Angeles, where Affleck lives, and Miami, where Lopez has her home base.

Earlier this month, another source told PEOPLE the two were "discussing summer plans," adding they "want to spend as much time together as possible" despite living on opposite coasts.

"They also want to take a trip," the source noted. 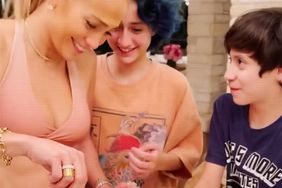 Watch Jennifer Lopez and Her Twins, 13, Make Halloween Treats: 'I Knew It Was Gonna Be a Flop'