"I think people are going to be blown away by his Bruce Wayne and his Batman," says Michael Wilkinson

Affleck, 43, is taking on the role of the Caped Crusader in the upcoming Batman v Superman, and according to costume designer Michael Wilkinson, fans are going to be “blown away” by his portrayal of the beloved DC Comics character.

“I think people are going to be blown away by his Bruce Wayne and his Batman,” Wilkinson told PEOPLE at the 18th Costume Designers Guild Awards on Tuesday night. “It just feels right, like he was born to be this character.”

Wilkinson said Affleck embodies the perfect combination of characteristics to put his own spin on the character, while staying true to the Batman fans have grown up with.

“He’s sexy, he’s smart and seductive,” he said. “He’s strong and a little intimidating and scary, he’s a real brawler, there’s nothing precious about his Bruce Wayne. He rolls up his sleeves and gets it done.”

And with the help of Wilkinson, Affleck certainly looks the part. Wilkinson also revealed the actor’s initial thoughts when seeing himself in the iconic costume for the first time.

“I remember he just kind of looked at himself in the mirror, pretty happy with how he looked,” he said. “The costume is very intimidating and huge and I think he intimidated himself when he looked in the mirror, so that’s a good sign.”

So what should fans expect from the upcoming film?

“Hold onto your socks because they’re about to blown off,” he said. 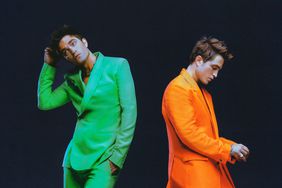