The pair, first spotted together in March 2020 after wrapping a movie, went their separate ways in January, a source tells PEOPLE

Not long after wrapping a new film, Deep Water, in Louisiana, Ben Affleck and Ana de Armas were spotted vacationing in her native Cuba.

On March 5, 2020, the actors were seen going out to eat and walking around Havana, where de Armas is from. The two were pictured smiling and laughing on a walk around the Cuban capital by photographers and fans, who asked to take photos with the stars. Days later, the pair made their way to Costa Rica.

On March 8, a source confirmed to PEOPLE, "They are definitely dating."

After the pair arrived back in Los Angeles as quarantine began, a Deep Water source told PEOPLE the two "had great chemistry right from the start. Ben always seemed very relaxed and happy around Ana." In the early days of lockdown, they often took her dogs for walks around her L.A. neighborhood, arm-in-arm.

"Photo credit pls 😂," Affleck wrote in a note on her sunset-lit photo from the couple's Costa Rica vacation, captured by the Comments by Celebs Instagram account.

The Knives Out actress did not tag or credit Affleck when she first shared the shots on social media, only captioning the slideshow, "✨🧡."

Instagram official! The two didn't shy away from showing their affection on social media as de Armas celebrated her 32nd birthday with the actor on a late April desert getaway.

"Thank you all so much for the birthday wishes and love! Cheers to another great year. 🎉🌈💕🙏🏻🌸🌹✨🎈," de Armas wrote in the caption.

The actress shared a series of photos on her Instagram page depicting her celebrating alongside Affleck. The two smiled at the camera as they hugged each other, while in another photo, they embraced as they stared at a sunset.

Though the actors rarely spoke of one another in their time together, Affleck did sing de Armas' praises in her April profile in Vogue Spain.

"The first time we read the scenes together, it became pretty clear she was going to do something exceptional with a very complex role," Affleck said of de Armas. "Her character is the engine of the story and requires her to move between tragedy and irony or between realism and the most absurd comedy."

The actor added: "Not only does she know how to do it with ease, she also manages to surprise you in every shot. Her talent is infinite."

In May, the couple shared a sweet kiss in a music video about showcasing love.

The video was created for the song "Antes Que El Mundo Se Acabe" ("Before the World Ends") by Puerto Rican rapper Residente. It featured 113 kisses from couples, including Affleck and de Armas, in 80 different countries around the world.

For their portion of the music video, Affleck held the camera up to capture several loving kisses between the couple, and then panned out to show the beautiful landscape around them. The clip appeared to have been shot during their trip to the California desert in April to celebrate de Armas' 32nd birthday.

Around that time, a source told PEOPLE, "They seem to have a great time together. They order delivery food and groceries and only leave the house for walks around the neighborhood with their dogs. Ben looks incredibly happy. They are flirty and goofy. Ana always has a huge smile around him."

Later in May, the pair enjoyed an outing in Los Angeles with Affleck's three children, Violet, Seraphina and Samuel, as well as family dog Birdie.

"[Ben] wants the kids to spend time with [Ana] so they can get to know her," a source told PEOPLE of the "very serious" couple.

Later in the summer, the kids even left a cutout of de Armas on their dad's front yard.

By June, the couple was vacationing in Georgia with the actor's kids and his mother, Christine.

"Ana seems to love being around his kids. Everyone has been getting along great," a source told PEOPLE. "Ana is making an effort to get to know his kids."

In early June, Affleck and de Armas were among the celebrities marching in support of the Black Lives Matter movement in Los Angeles.

The two actors were photographed at a protest in Venice, California, amid several other protesters who were denouncing the demolition of the First Baptist Church of Venice. The photo was shared on Twitter by the @savexvenice account.

Affleck wore a dark gray T-shirt and a matching sweater and held up two signs, one of which read, "Save First Baptist Church of Venice," while a smaller one read, "Black Lives Matter."

A friend of Affleck's told PEOPLE, "Ben wants to continue to be a model for his children. They talk about these important issues."

For Affleck's 48th birthday in August, de Armas gifted her boyfriend a new BMW motorcycle, which was built from scratch for him by WYLD Garage Co. She also surprised him with his-and-hers matching helmets.

The Deep Water costars were spotted riding the new motorcycle together in Pacific Palisades, California, that weekend, as de Armas was seen throwing her hands up in the fresh air.

"They are enjoying their time together," a friend of Affleck told PEOPLE. "He makes her laugh and she's a great influence. They safely visit with his family and he works to make sure he is healthy and present for his family. His priority will always be his children and making that work."

Later that month, de Armas was spotted moving some things into Affleck's Los Angeles home from her place in Venice.

"She had a huge grin and seemed very excited about living with Affleck," a source told PEOPLE.

"Ben and Ana really care for each other and they have a good thing going," a friend of the couple added to PEOPLE. "She's aware that his family comes first. And appreciates that. They work very hard at that balance."

August also brought the second of just two Instagram photos de Armas ever shared of her boyfriend, this a smiley selfie.

In November, after some time out of the spotlight, the stars returned to New Orleans, where they first met, for some Deep Water reshoots. They were spotted kissing on a balcony, and de Armas even (perhaps inadvertently) snuck her boyfriend into an on-set selfie with her pooch.

The pair returned to Los Angeles later that month, shopping before spending their first Thanksgiving together. The couple hosted Affleck's kids at his home for the holiday.

"Ben and Ana seem great," said a source. "Everyone seemed very happy. Ana has been traveling so she had not seen the kids for a while."

In December 2020, PEOPLE confirmed de Armas had moved into Affleck's home officially, putting her own place on the market. A friend of the actor told PEOPLE, "their relationship continues to be strong."

"Ben is no longer dating Ana," a source told PEOPLE. "She broke it off. Their relationship was complicated. Ana doesn't want to be Los Angeles based and Ben obviously has to since his kids live in Los Angeles."

"This is something that was mutual and something that is completely amicable," another source close to Affleck and de Armas added. "They are in different points in their lives; there is deep love and respect there. Ben continues to want to work on himself. He has three jobs lined up and he's a solid father at home. They are both happy with where they are in their lives." 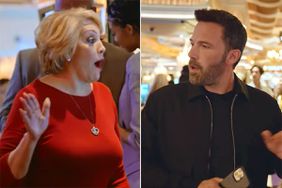