Beck Weathers Lost His Nose and Both Hands on His Fateful Everest Climb, but Says the Ordeal Saved His Marriage

When Beck Weathers set out to climb Mount Everest in 1996 he had no idea the physical toll that lay ahead.

The disastrous journey was immortalized in Jon Krakauer’s 1997 bestseller Into Thin Air, and can now be seen in the new film Everest out Friday and starring Jake Gyllenhaal and Josh Brolin as Weathers.

The movie depicts the journey that left Weathers in a hypothermic coma for more than 15 hours. After being pronounced dead, he miraculously awoke but suffered the loss of his hands and nose due to frostbite.

Yet the Dallas pathologist says he would do it all again – because the traumatic experience ended up saving his marriage.

In this week’s issue of PEOPLE, Weathers reveals that before leaving for Nepal his marriage was in trouble, and when he returned home he found out his wife, Peach, had planned to leave him.

“She had decided to divorce me, but was not going to tell me while I was on the mountain and was going to wait until I got home,” says Weathers.

But that all changed after the harrowing ordeal in which Peach was told by authorities that Weathers had died. She later received a second phone call informing her that her husband, and the father of their two children, was in fact alive.

After returning home, Weathers underwent more than ten reconstructive surgeries with Peach by his side.

But Weathers, who had previously suffered from depression, knew that in order to save his marriage his attitude needed the biggest overhaul.

“I made an agreement with myself that I was going to be the biggest little Mary Sunshine on the face of the planet, and I would find something every day to appreciate that I would not have been able to enjoy had I not been able to struggle back to life,” he says.

This year, he and Peach are celebrating their 39th wedding anniversary – and recently welcomed a granddaughter to their family.

“We are like a pair of old slippers,” says Peach. “Just enjoying day-to-day things.”

And Weathers credits his family with saving his life while he was up on Everest.

“It was the image of my wife and children that drove me to my feet, and that managed to awake me after 15 hours of being frozen facedown in the ice,” says Weathers. “It would be very difficult to put into words just how powerful that was to be back with them and safe again.”

For more on Beck Weathers life-changing experience, check out this week’s issue of PEOPLE, on newsstands Friday. 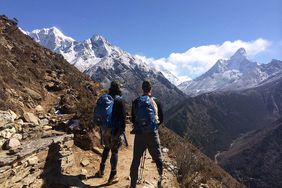 Veteran Amputee and Former Hell's Angel to Climb Mount Everest Together: 'The Reward Is Greater Than Any Risk' 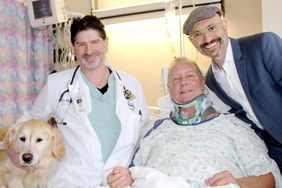