"I was brainwashed to believe this was a valid medical procedure," one survivor tells HBO in the documentary's trailer, which PEOPLE is exclusively debuting

It has been a little over a year since former Team USA gymnastics doctor Larry Nassar was sentenced to 175 years in prison for sexually abusing hundreds of women and girls, under the guise of being a trusted medical provider and friend.

The aftermath of his actions and the testimonies of the 156 survivors who came forward during his trial still reverberate across the gymnastics community.

Now, HBO’s new documentary — At The Heart Of Gold: Inside The USA Gymnastics Scandal directed by Erin Lee Carr — aims to reveal the dangerous system that allowed Nassar to exploit his position, providing him with opportunities to take advantage of unsuspecting athletes, and get away with it for more than 30 years.

“I was brainwashed to believe this was a valid medical procedure,” one survivor says in the first trailer for the documentary, exclusively debuted by PEOPLE.

The film interviews dozens of survivors, coaches, lawyers and journalists to expose the circumstances in which these gymnasts grew up, a competitive environment that many claim prioritizes winning over all else — an environment that protected the doctor against initial accusations.

Even with mounting accusations, it wasn’t until 2016, when lawyer and former gymnast Rachael Denhollander went public with her story to Indianapolis Star, that legal action against Nassar began. In 2018, his official sentencing came after a week of heartwrenching and powerful testimonies from survivors, with Judge Rosemarie Aquilina giving the sentencing statement.

RELATED VIDEO: Simone Biles Says She Slept ‘All the Time’ to Cope with Sexual Abuse: ‘I Was Very Depressed’

At The Heart Of Gold: Inside The USA Gymnastics Scandal debuts on May 3, exclusively on HBO. 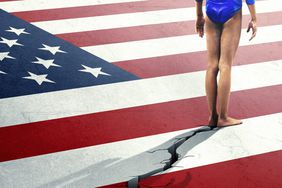