The Aquaman star, 39, appears in the latest issue of PEOPLE where he looks back on his career and his early acting days

The Aquaman star, 39, appears in the latest issue of PEOPLE where he looks back on his career and his early acting days. And the Hawaiian-born actor looked completely unrecognizable in one picture PEOPLE unearthed of him on the set of Baywatch: Hawaii all the way back in 2000.

In the shot, Momoa’s famous long hair is replaced by a short and curly look, with a tattoo-less 20-year-old Momoa giving the camera a smoldering gaze as he shows off his impressive abs in the signature red swimming trunks.

But no matter the appreciation for the photo or his Baywatch look, the actor recently said that he’s not going back to his short-haired days any time soon.

“My wife would leave me if I cut my hair so I just don’t cut my hair,” Momoa told the Daily Telegraph. “I am not cutting my hair for a while, I will tell you that much.”

Hair is a sweet part of his relationship with wife Lisa Bonet, 51, from the moment they met in 2005.

“We just happened to be in the right place at the right time,” the actor told James Corden in 2017 about the first time he met Bonet in a jazz club in N.Y.C.. “I actually had dreaded my hair for her. I had dreadlocks, she had dreadlocks. I literally turned around and I see her and she goes, ‘I’m Lisa.’”

He continued, “I turned around to my friend and I [pretended to scream]. I had f—ing fireworks going off inside, man.”

The two have been together ever since. They tied the knot in October 2017 and share two children together, daughter Lola Iolani, 11, and son Nakoa-Wolf Manakauapo Namakaeha. (Bonet is also mom to daughter Zoë Kravitz, 30, with ex-husband Lenny Kravitz.)

While he wants to keep his wife happy, Momoa revealed he’s also not planning to cut his hair for professional reasons. “I am going to be playing this guy for a while and I don’t want to wear a wig,” he said about his Aquaman character and shooting potential sequels. “I think we are good for the next two years.”Aquaman is in theaters now. 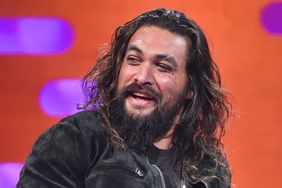 'Aquaman' 's Jason Momoa Says Wife Lisa Bonet Doesn't Want Him to Cut His Hair: She 'Would Leave Me' 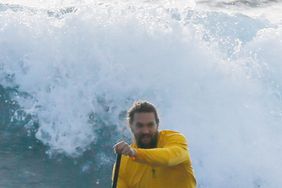 Jason Momoa Loves the Water! Aquaman Himself Goes Paddle-Boarding in Hawaii Over the Holidays 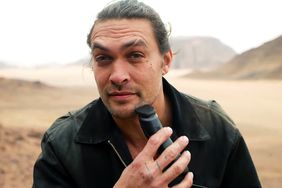