"Honey, what if I'm the littlest jealous," Faris asked her husband on Twitter on Monday

Chris Pratt‘s character in Jurassic World has a special relationship with some of the dinosaurs, and – Spoiler Alert – with one raptor in particular.

And that’s not sitting comfortably with Pratt’s wife, Anna Faris.

“Honey, what if I’m the littlest jealous of Blue?” she Tweeted her husband on Monday night about the dino his character, Owen Grady, seems to be closest to.

“I mean, she’s hot, smart, and you clearly adore her – thoughts?”

“She’s a little cold blooded for my taste,” he Tweeted. “#rimshot But seriously. Nothing happened.” 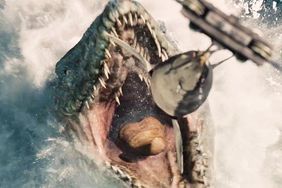 Everything Goes to Hell in the New 'Jurassic World' Trailer (VIDEO)