"He got a heads-up [about the filing] two days before, and he was appealing to her to do this quietly," source tells PEOPLE

Brad Pitt was devastated by the news that Angelina Jolie was filing for divorce.

“He is just wrecked by this,” a source close to the actor tells PEOPLE in this week’s cover story. “He got a heads-up [about the filing] two days before, and he was appealing to her to do this quietly – not to save the marriage but to consider the well-being of the children – and it was ignored,” the source contends.

On Thursday, PEOPLE confirmed that Pitt is under investigation for child abuse by the L.A. County Department of Children and Family Services following a Sept. 14 incident on a private plane in which he allegedly got verbally abusive and physical the couple’s oldest child, Maddox, 15. In her divorce filing, Jolie listed the couple’s date of separation as the following day, Sept. 15.

Pitt is cooperating with the investigation, which has been referred to the FBI, and maintains “he did not commit any abuse of his children,” a source close to the actor told PEOPLE.

“Angelina did what she felt she needed to do,” says a source close to the actress. “She’s loved this man for several years, and [divorce] is not something you do impulsively.”

Jolie, 41, filed for divorce from Pitt, 52, on Monday after two years of marriage and 12 years as partners. She cited irreconcilable differences for their split and asked for sole physical custody of the couple’s six children – Maddox, Pax, Zahara, Shiloh, Vivienne and Knox – with visitation rights for Pitt. She also asked that legal custody be shared with her soon-to-be ex-husband.

Pitt knew the marriage was in trouble and had been in counseling “to try to figure out how to make things better” for the kids, says a source in Pitt’s circle. “He was willing to do anything, change any habit, change any lifestyle, to do what had to be done to make this work. And by ‘make this work,’ that means doing what has to be done to make even a split one that is amicable and in the best interests of the children.”

Another insider who knows the couple says they “always had disagreements when it
came to disciplining the kids. Brad has always been stricter. Brad will get frustrated sometimes and yell at the kids.” But he “never used any kind of physical discipline,” the source adds. “He was more about having rules. Angelina always had a more relaxed attitude when it came to the kids.”

During “chaotic” moments, a Pitt source says, the actor advocated for rules, while “Angelina would plea, or not make the kids follow though.”

In a statement to PEOPLE, Pitt said, “I am very saddened by this, but what matters most now is the well-being of our kids.” In a separate statement, Jolie said: “This decision was made for the health of the family.”

“Both Brad and Angelina care very much about their kids,” says the source in Pitt’s circle, “and there is sadness on both sides.” 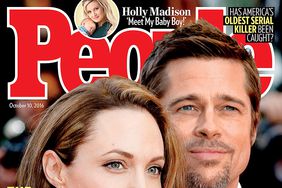