The family was spotted settling into their economy seats while catching a flight to Nice, France

Fly economy on Air France and you might just find yourself next to one of Hollywood’s most famous families.

Angelina Jolie-Pitt and Brad Pitt were photographed finding their seats alongside their kiddies in the coach section on the French airline while traveling from Paris to Nice on Saturday. (The couple have a French home, Chateau Miraval, in Provence, near Nice.)

The Unbroken director, 40, kept her sunglasses on while helping her children get situated. Her airport attire consisted of a leather jacket, slacks and nude flats, paired with Louis Vuitton luggage.

Her husband helped pile their bags into the overhead compartment with the help of 11-year-old Pax, the couple’s second child, while donning a fedora hat and a dark purple tee.

The family affair kicked off back in Los Angeles, when the clan of eight was seen waiting for a flight out of LAX, headed to the French capital. Once they arrived in Paris, the kids held onto each other as they followed their parents’ lead through the airport to their connecting flight.

Nice is a special place for the Pitts. The family was the talk of the city after welcoming their twins, Knox Leon and Vivienne Marcheline, now 6, in Nice back in July 2008.

The newlyweds recently wrapped romantic drama By the Sea, their first onscreen collaboration since they first met on while working on 2005’s Mr. and Mrs. Smith. Jolie not only stars but also wrote the screenplay and is both directing and producing. (It hits theaters in November.)

The actor, meanwhile, is also headed to … Netflix!

Pitt is set to star in the lead role in the streaming platform’s upcoming comedy War Machine, which premieres in 2016.

“We are so excited to be a part of the inspiring commitment by Netflix to produce cutting-edge content and to deliver it to a global audience,” the actor said in a statement. 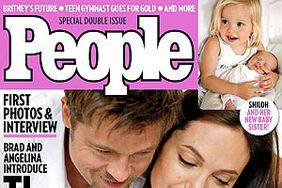