Amy Sedaris Gets Bossy for Her New Role and Talks Brothers, Bunnies and Babies

The actress voices a demanding infant in The Boss Baby: Family Business

Amy Sedaris says her role as the new infant in The Boss Baby: The Family Business, a sequel to the hit 2017 animated film, was the perfect part for her.

"A bossy baby is different than just a baby. A baby would have been like, 'I don't want to play it. It's not going to be any fun.' But a bossy baby that wears a three-piece suit and a clip-on tie is exactly what I would love to play. I like playing bossy people," she tells PEOPLE in this week's issue.

The sequel revolves around the Templeton brothers — Tim (James Marsden) and his Boss Baby brother Ted (Alec Baldwin) — who have become adults and drifted apart.

Sedaris, 60, who was raised alongside three sisters and two brothers — including acclaimed author David Sedaris — says she loved growing up in a big family and remains close to her siblings.

Boss Babies! Alec and Hilaria Baldwin Dress Up in Matching Suits with Their 6 Kids for Film Premiere

"I'm happiest when I'm with my family," says Sedaris. "We were like the Munster house. Kids in our neighborhood wanted to play at our house, but we were exclusive. We all have the same sense of humor. We still are a very close family."

Sedaris, who has starred on The Mandalorian and At Home with Amy Sedaris (her truTV comedy series), says she always knew she wanted to be an actor.

"When we were little, I had an imaginary cooking show with my brother David and a fake Price Is Right show," she says. "We were always putting on shows."

These days the pair still enjoy spending time together. "We're always laughing and bouncing ideas off each other. We go to the park and feed squirrels. I'm into woodland creatures. I like small animals."

But Sedaris' favorite animal is her pet bunny, Tina, who is actually a male rabbit.

"When I got him, I thought it was a girl," she says. "But lately, I see Tina nodding off a lot. I'm like, 'Oh, you're now turning into grandpa taking extra naps and growing a little grumpy.'"

The Boss Baby: Family Business is now in theaters on available to stream on Peacock. 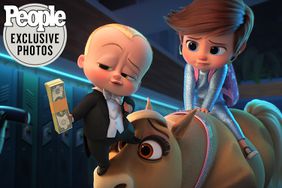