Christian Bale emulated a charismatic yet insane Wall Street murderer in American Psycho — but he almost lost the part to Leonardo DiCaprio.

On the 20th anniversary of the film, based on the novel of the same name by Bret Easton Ellis, Bale, 45, and director Mary Harron, along with some of the cast from the movie remembered how the film could have turned out differently in an oral history published by MovieMaker.

“Obviously, I think DiCaprio’s a great actor, but I thought he was wrong for it,” Harron, 67, told the magazine of Lionsgate’s move to pay DiCaprio $20 million to star as the psychotic Patrick Bateman. “I thought Christian was better for it, and I also thought, and I think my instinct was right on this, [DiCaprio] carried enormous baggage because he had just come off Titanic and I thought you cannot take someone who has a worldwide fanbase of 15-year-old girls, 14-year-old girls and cast him as Patrick Bateman.”

The role was a controversial one as the character of Bateman splits his time as an investment banker on Wall Street by day and a grisly murderer of women by night.

Harron said DiCaprio’s casting would have been “very bad for him and very bad for the movie,” adding, “Because everybody will be all over it.”

“They’ll rewrite the script and all the rest,” she said. “And I knew I could only make this work if I had complete control over it, over the tone and everything.”

When the studio decided to move forward with DiCaprio, 45, and Oliver Stone as director, Harron thought she’d lost out on an amazing opportunity. Bale, however, kept himself in shape believing he’d get the role back with Harron as director.

“I said to her, ‘I’m still gonna make this, and I’m still gonna keep prepping on it,'” Bale recalled. “And I would call her to talk about scenes, and she would be on a family vacation and she’d say, ‘Christian, please, I’m trying to have dinner. And I don’t know if you’ve noticed, but there’s other people making the film now.’ And I’d say, ‘Mary, just stop being so negative. We’re gonna do this.’ Everybody thought I was crazy, but it became a crusade for me.”

Ellis, whose book was published in 1991, told MovieMaker he doubted DiCaprio’s career “would have survived” the film.

Guinevere Turner, who portrayed Bateman’s acquaintance Elizabeth in the film, said it was Gloria Steinem, the famous political activist, who probably convinced DiCaprio against starring in the film. (Steinem married Bale’s father, David, in 2002. The two later divorced in 2003.)

“Gloria Steinem, as legend would have it, took [DiCaprio] to a baseball game and said, ‘Please don’t do this movie. You’re the biggest movie star in the world right now, and teenage girls are living for you, and I really don’t want them all to run to the theater to see a movie where you’re a man who kills women,'” Turner said.

Instead, DiCaprio opted to film The Beach, which centered on Richard (DiCaprio), a freelance traveler who finds a map leading to a solitary beach paradise.

When American Psycho debuted at the 2000 Sundance Film Festival, it received positive reviews for both Bale’s performance and the screenplay.

DiCaprio ultimately did get his chance to sink his teeth into a Wall Street player starring in Martin Scorsese‘s 2013 film The Wolf of Wall Street for which he was nominated for a Best Actor Oscar the following year. 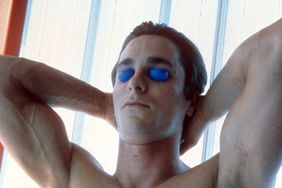 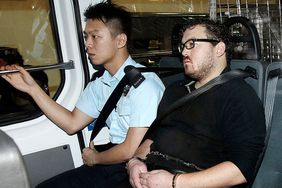