Who Is Tasya van Ree? 5 Things to Know About Amber Heard's Ex-Girlfriend

As more and more is revealed about Amber Heard and Johnny Depp‘s tumultuous marriage, Heard’s previous relationship has been put in the spotlight.

Heard – who has alleged in court documents that Depp repeatedly abused her – was once arrested for alleged domestic violence against girlfriend Tasya van Ree, PEOPLE has confirmed.

Heard was arrested following an alleged altercation with van Ree at the Seattle-Tacoma International Airport in 2009. The prosecutor ultimately decided not to pursue the case.

But who is van Ree? The 40-year-old Hawaii native dated Heard for four years, splitting in 2012 – around the time Heard was first linked to Depp.

The two were frequently photographed together and van Ree would often accompany Heard to red carpet events. At one point, Heard even legally changed her name to van Ree but later switched it back, according to documents obtained by PEOPLE. .

Here’s everything you need to know about van Ree in the wake of the latest revelations.

1. She’s an artist and a photographer.

She’s made a name for herself in the art and photography world and has shifted from black-and-white photos of models and stars to what she calls “surreal visual” pieces in an interview with Smashbox Studios.

“Her photographs are infused with romanticism, darkness, intimacy, and a certain lyrical quality,” van Ree’s Facebook page declares. “They also capture the essence of the people, the landscape, and the intricacies of both the animate and inanimate worlds, and are a sort of meditation in seeing the powerful testaments between the relationship of human presence and transitory nature.”

Van Ree’s artwork has been included in solo and group exhibitions, her most recent, “Theory of Daydreams” – which featured colored photographs of butterflies – opened in Los Angeles last January.

2. She once had her own clothing line.

In addition to photography, van Ree has fashion design experience, once launching her own line of T-shirts.

The series, created under the brand name Die Wilder, included slogans like “Death in the wild, death in the city,” according to Interview magazine.

Van Ree told Interview that the label was meant to convey the “the intellectual and emotional closeness of life and death.”

“In this series of designs I wanted it to be simple and direct, without distractions from the message,” she explained. “No over-stimulating visuals to obscure the seer from getting the overall meaning. I feel that words are very influential and can communicate anything into the subconscious to begin change from the inside out.”

3. She has on-screen experience.

She starred in director Aya Tanimura’s 2013 short film Kill of the Night as a kidnapper for hire, who, according to IMDB, takes a suburban family man for the ride of his life.

4. She can’t live without her dog – and gifted Heard hers.

Van Ree has a chihuahua named Kiki, she told Free People – and said she can’t live without the pooch.

She is definitely an animal lover – van Ree also noted her affection for horses to Free People – and reportedly gifted Heard her dog Pistol. The Yorkshire Terrier was at the center of Heard and Depp’s dog-smuggling case in Australia last year.

5. Heard may have been van Ree’s biggest work inspiration.

While van Ree is inspired by many things, she cited one experience as having the biggest impact on her career.

“Being in love and documenting that process through art and photos,” she told Colony2139. “There’s nothing like it.” 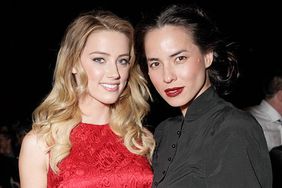