Heard, the source says, had a four-hour meeting with the firm in Los Angeles on Friday amid her ongoing acrimonious divorce from husband Johnny Depp, whom she alleges continually abused her.

In addition to the divorce proceedings, Heard also filed a defamation lawsuit against comedian Doug Stanhope last week after he accused her of blackmailing Depp and lying about the alleged domestic abuse.

Heard claims that Stanhope “orchestrated a plot to write an article, which was published at TheWrap.com, which falsely accuses plaintiff Amber Heard of ‘blackmail’ and other criminal behavior towards her husband, Johnny Depp, from whom she is seeking a divorce,” according to the court filing.

Heard’s lawyer Charles J. Harder told PEOPLE in a statement that Heard is seeking the “maximum possible jury award” in her case against Stanhope, and will donate any monetary awards to a domestic violence charity.

Allred, 74, is known for tackling high-profile cases. She represented the pseudonymous plantiff Jane Roe in the landmark abortion-rights case Roe v Wade, Scott Peterson’s girlfriend Amber Frey in the Laci Peterson murder case, and several women who have accused Bill Cosby of sexual abuse. Allred typically works with discrimination and sexual-abuse lawsuits, and sometimes serves as a publicist and advocate for women’s rights.

Heard has made shocking accusations against Depp since filing for divorce, and was granted a temporary restraining order against the star on May 27.

In her court filing against Stanhope, which was obtained by PEOPLE, Heard revealed more details about Depp’s allegedly violent behavior, which Heard claims was fueled by drugs and alcohol.

“Depp has hit and kicked Heard on numerous occasions, has thrown objects at her, at one point nearly suffocated her to the point where she feared for her life,” the filing said.

Depp has continued to tour with the Hollywood Vampires amid the drama, with his lawyers saying in court documents that Heard is merely “attempting to secure a premature financial resolution by alleging abuse.” 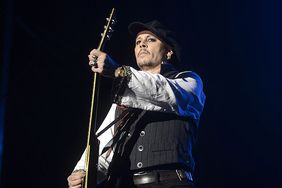