"I literally said 'Look, I hope the answer is yes, but I need an answer I'm 52 and I could throw out my hip pretty soon,' " Clooney tells Ellen DeGeneres

George Clooney and wife Amal are the picture of grace and beauty on the red carpet – but George has just revealed his marriage proposal was quite the opposite.

For starters, it was such a surprise to Amal that she didn’t even understand what he was asking.

“It was one of those horrible moments we didn t talk about it,” Clooney, 54, admits. “It wasn’t like ‘oh, maybe we should get married’ or anything. I plotted the whole thing out.”

Clooney says he had his aunt Rosemary Clooney’s song “Why Shouldn’t I” playing in the background, had cooked dinner and hidden the ring in preparation for the big moment.

“I’ve got it all set up, timed out and the song is coming and she gets up to go wash the dishes, which she’s never done,” Clooney explains. “And I’m like, ‘What are you doing?’ and she comes back in. And finally I said, ‘Ya know, I blew out the candle’ and I said, ‘I think the lighter’s in the box behind you.’ And she reaches around and she pulls out the box and I’ve got just the ring sitting in there and she pulls it out and she looks at it and she’s like, ‘It’s a ring’ – like as if somebody had left it there some other time.”

Clooney made a whole spectrum of facial expressions to try to make his attentions clear before finally dropping down on one knee.

“[I] said, ‘I couldn’t imagine spending the rest of my life without you,’ ” he explains. “And she kept looking at the ring and she was looking at me and she was like ‘Oh my God.’ ”

The Hail, Caesar! star says that the whole ordeal lasted 25 minutes, prompting him to finally say, “Look, I hope the answer is yes, but I need an answer I’m 52 and I could throw out my hip pretty soon.”

The human rights lawyer, who celebrated her first wedding anniversary with Clooney last September, stole the actor’s heart early in their relationship. 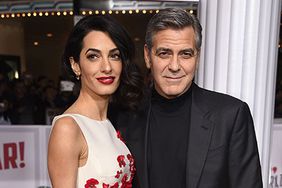 Amal and George Clooney Buy the Kitchen Staff Tequila During a Belated Birthday Celebration in L.A.