Allison Janney Skinny-Dipped with 'Breaking News in Yuba County' Costars: 'We Would Get Crazy'

Allison Janney is opening up about the "crazy" and "silly" bonding time she shared with her Breaking News in Yuba County costars.

The Oscar winner, 61, stars in the new film as Sue Buttons, a woman who becomes a local celebrity after her husband Karl goes missing. On Tuesday's episode of The Ellen DeGeneres Show, Janney talked about how she enjoyed herself with the star-studded cast between takes.

"He's got these wonderful homes that are in walking distance of each other, so everyone could either stay in the hotel in town, in Natchez, [Mississippi], or stay on his property, and everyone mostly chose to do that," she added.

"Everyone would eat together, we would get crazy — I didn't have any scenes with Wanda but we got to dance in the kitchen together one night, having a little too much wine and being silly," recalled Janney. "Just getting to live together, getting to know each other. ... It was like actor camp."

"I heard there was some skinny-dipping," DeGeneres said.

"Yeah, there was skinny-dipping," confirmed Janney. "There was other things that I am not at liberty to share with you on television."

Allison Janney Forgot She Was in 10 Things I Hate About You: 'What Is This?'

In the movie, as the investigation into her husband's disappearance ramps up, Sue finds herself dodging a wannabe mobster (Awkwafina), a suspicious cop (Hall), her half-sister (Kunis) and her husband's dead-beat brother (Simpson) who are all out to uncover the truth.

Janney echoed the behind-the-scenes camaraderie in a recent interview with The A.V. Club, telling the outlet: "All of these amazing actors ... we all lived in the same house together. So when we finished working, we'd all come home and cook meals together and drink wine together and dance and be silly ... and form real friendships and chemistry with everyone."

Breaking News in Yuba County is now available on demand. 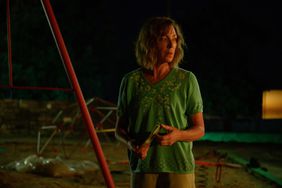