In the thriller, Al Pacino stars as a lawyer defending a U.S. citizen from charges of treason after she broadcast Nazi propaganda to U.S. troops during World War II

Al Pacino's next film is just around the corner.

In a PEOPLE exclusive look at the first trailer for American Traitor: The Trial of Axis Sally, the Oscar winner takes on the real story of lawyer James Laughlin who defends Mildred Gillars, an American woman accused of treason for broadcasting Nazi propaganda to U.S. troops during World War II.

"You are right now at this very moment the most hated person in America," Laughlin tells Gillars (played by Meadow Williams). "Eight counts of treason."

Facing the death penalty, Gillars, then known as Axis Sally, was accused of destroying the "morale" of U.S. troops through her broadcasts, which she claimed she did under duress.

"I did what I could to survive. I had no choices," she says. "Men have been taking advantage of me my whole life."

As Pacino's Laughlin fights for Gillars' freedom, her story exposes the dark underbelly of the Hitler's propaganda machine.

This is Pacino's first film since 2019's The Irishman for which he received an Academy Award nomination for Best Supporting Actor.

Meadows has previously worked with Pacino's The Irishman costar Robert De Niro in the upcoming film Wash Me in the River.

"This is me reaching one of my life's goals. Don't let anyone ever tell you that you can't," she wrote in an Instagram post in March. "I am a girl from a farming family in Tennessee, dirt poor, 10 kids with one bathroom and no heat or A/C. I worked my a-- off then, I work my a-- off now....but if you believe it, you put your heart and soul in it, you stay true to all that is good in you—you can make your dreams come true."

"This is me finishing "Wash Me in the River" with the great Robert DeNiro, a masterpiece of a man, and Rand Emmett, and fabulously talented director. @randallemmettfilms #actress #acting #film," she added.

American Traitor: The Trial of Axis Sally is in theaters May 28.

Iva D'Aquino Was Tokyo Rose, All Right, but Was She a 'Patriot,' Too?

Fighting for Errol Flynn's Reputation, His Daughters Sue Over Charges He Was a Bi Spy

The Battle Is Joined as Gen. William Westmoreland Sues CBS for $120 Million 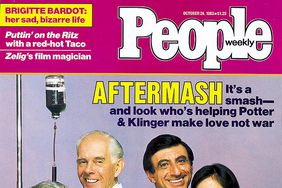