Nineteen-year-old Justice Henry says hope is what gets him out of bed every morning.

“You always have to have hope,” Henry of the Bronx, New York, tells PEOPLE. “Even when it’s hard to see it, you need to believe in it.”

Henry is just one of 1,300 kids waiting to be adopted in New York City. Additionally, there are more than 700 kids on the verge of aging out of the foster care system.

“People say I’m unadoptable,” says Henry. “But I disagree. It’s never to late to have someone in your life who you can call family.”

Numerous stars came to support the non-profit organization You Gotta Believe on Monday night for the “Voices for the Voiceless: Stars for Foster Kids” event in New York City.

“People really just want babies,” Henry says. “As us kids get older, it becomes really hard to get adopted.”

Many stars took to the stage to perform, including Tina Fey and Jane Krakowski.

While Krakowski sang Don t Cry Out Loud,” Fey chimed in with her hilarious commentary.

“Don’t cry out loud? Terrible advice,” Fey said in between Krakowski’s lines. “I think Peter Allen and Carole Bayer Sager were day-drunk when they wrote this song.”

Broadway alum and former Smash star Megan Hilty performed “Do-Re-Mi” with several children on stage, and Glee star Darren Criss even auctioned off a serenade for $30,000. He sent hearts a flutter when he sang “Close to You” to a woman and a 7-year-old girl.

The evening not only brought attention to an underserved cause (on March 31, New York City cut the funding for the critical older youth adoption and permanency services), it also brought in over $500,000 for the organization.

“We need to help these kids,” co-host James Wesley tells PEOPLE. “Every person deserves a home. It doesn’t matter how old you are.”

Wesley’s husband, Seth Rudetsky, was also on stage during the event.

“We adopted our daughter and there are still so many other kids out there who need a home,” Rudetsky tells PEOPLE. “You see the success stories, but there are a lot of kids and adults still looking for their forever family.

The most heartfelt moments of the night came when children and young adults walked on stage to share their strong desire to get adopted.

“You need a role model in your life,” Rudetsky says.

Wesley adds: “You need someone you can share your successes and failures with.” 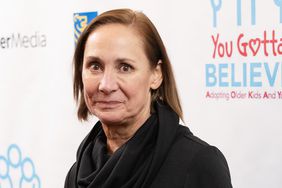