Single Mom Who Grew Up in Foster Care Adopts 6 Boys: 'They Give Me Purpose'

A Wisconsin mom of two became a mom of eight when she adopted six boys last week, more than three decades after she was placed in the foster care system.

Jessica Benzakein of Milwaukee told Today she was 12 years old when she was placed in foster care after her mother lost custody rights. At the time, a caseworker warned Benzakein she was going to have a difficult time finding a family to adopt her because of her older age.

Benzakein spent the next six years in foster care until she enrolled in college when she turned 18. But she still felt the weight of not having a family.

One year during the holidays, she rented a room for herself when other students left to be at home with their loved ones.

“You’re expected to leave, but I didn’t have anywhere to go,” Benzakein, 46, told Today of spending Christmas on campus. “So, I paid to stay in a room the size of a guest closet.”

Determined to make a difference for youth in foster care, Benzakein took in six boys — siblings Will, 17, Carter, 14, Sidney, 13, and Buddy, 8, and brothers Kendrich, 6, and T.J., 4 — about five years ago, according to WTMJ.

Man Who Grew Up in Foster Care Adopts Three Boys: ‘I’m the Father I Wish I Had Growing Up’

The boys instantly became close with Benzakein’s biological children, Eli, 14, and Brenna, 9, whom she shares with her ex-husband.

“I need them. They keep me grounded still,” she told the news station.

That’s why Benzakein made things official on Friday by legally adopting all six boys, and ensuring they all will be in each other’s lives for a long time to come.

Mom Learns Her 2 Adopted Kids Are Biological Siblings: ‘They Were Meant to Find Each Other’

According to the Adoption Network, about 428,000 children are currently in foster care in the United States and more than 114,000 cannot be returned to their families. Only 135,000 children are adopted in the country each year.

Nearly 20,000 children will age out of the foster care system when they reach the age of 18 or 21, depending on the state where they live, AdoptUSKids reported. These young people will then be at increased odds of experiencing homelessness and becoming unemployed, the organization said.

“Everybody tells me how lucky these kids are and what a good thing I did,” Benzakein told Today. “But… they grounded me. I went through my 20s thinking I didn’t really need a family. But I did. They give me purpose.” 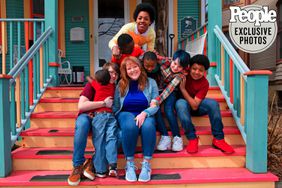 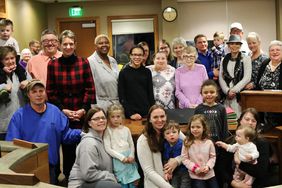