The students posted the controversial photo to Twitter on Sunday

A Wisconsin high school is facing backlash after a photograph featuring several of its students posing with the Nazi salute went viral.

Over the weekend, approximately 50 male students from Baraboo High School were captured laughing in the much-talked-about photo — taken ahead of their prom last spring — and shared it to a “parody” Twitter account called “Welcome to Baraboo.”

The image was also reportedly shared to Facebook, according to the Baraboo News Republic.

“We even got the black kid to throw it up #BarabooProud,” the tweet said, which has since been deleted but was captured by former student Carly Sidey, who also tagged the school district to bring awareness to the “BEYOND sickening” image.

Almost immediately after it was shared on both Twitter and Facebook, the post — featuring the school district’s signature hashtag #barabooproud to promote school-sanctioned activities and athletics — went viral.

While most of the students featured in the photo were seen with their arm raised high above their head, one of them was notably not participating in the gesture.

Jordan Blue, seen in the top right corner, spoke with journalist Jules Suzdaltsev in the midst of the controversy about the image and his troubling high school experience. Blue explained that although he was “uncomfortable” with the shot — which he said was prompted by their photographer — he felt he had no other choice, as he was often bullied by his fellow classmates.

“I have struggled with [bullying] my entire life and nothing has changed,” he told Suzdaltsev in a tweet. “I truly & firmly believe we need to make a change to this horrible act, it needs to stop.”

The photographer, Pete Gust, did not immediately respond to PEOPLE’s request for comment. On his company website, however, Gust has updated the prom photo tab with his statement addressing the controversy.

“Due [to] malevolent behavior on the part of some in society; this page has been modified,” he wrote. “It is too bad that there are those in society who can and do take the time to be jerks; knowingly and willingly to be jerks!”

Gust added, “The internet can be a wonderful tool but for some there is an overwhelming urge to destroy. The destruction may not be physical but instead it can be bullying that is intellectual or emotional. To anyone that was hurt I sincerely apologize.”

On Monday morning, the school district issued a statement, announcing that the inappropriate photo was not condoned by them and an investigation is currently underway.

“The Baraboo School District sent the following letter to parents this morning in response to a photo circulating on social media,” the district tweeted. “We are launching an investigation, and as such, are unable to provide additional details at this time.”

In the note, district superintendent Dr. Lori Mueller mentioned how “the Baraboo School District is a hate-free environment where all people, regardless of race, color, religion, creed, sex, sexual orientation, gender identity, national origin or ancestry, are respected and celebrated.”

Using her own personal Twitter account, Dr. Mueller also shared a separate message and explained, “The photo of students posted to #BarabooProud is not reflective of the educational values and beliefs of the School District of Baraboo. The District will pursue any and all available and appropriate actions, including legal, to address.”

Just hours after releasing a statement, the School District announced on Twitter that the high school would be on “modified administrative hold” to protect their students, staff, and faculty as the police investigate the matter.

The “soft hold” would prevent students from leaving the school’s grounds, often for lunch, without permission from a parent and school office approval, the Baraboo News Republic reported.

Baraboo Police Department also released a statement on Twitter and confirmed their involvement with the investigation, writing that they were “aware of a controversial photo” and were “assisting the Baraboo School District with their investigation into this matter.”

Within the last day, many people and groups have spoken their thoughts about the controversial image on social media. One of those groups included Auschwitz Memorial Museum who explained why education was so important to prevent this type of hatred from becoming normalized.

“It is so hard to find words…” they began the tweet. “This is why every single day we work hard to educate. We need to explain what is the danger of hateful ideology rising.”

“Auschwitz with its gas chambers was at the very end of the long process of normalizing and accommodating hatred,” they added.

The account later tweeted another message offering educational support to the students and Baraboo School District.

“If @barabooSD wishes to know more about what can be the extreme result of normalization of hatred – and hatred is enrolled in this symbol – please see some online lessons dedicated to the history of Auschwitz,” they wrote, attaching a link to the lessons.

This is not the first time that the Wisconsin community has been submerged in a racial controversy.

In 2012, a group of students honored their late friend who was killed in a car crash by driving their trucks around the town with Confederate battle flags hanging out the window, according to the Baraboo News Republic. The students later voluntarily removed the flags from their cars.

And just a few weeks ago, a flyer reading, “WHITE LIVES MATTER,” was illegally distributed in mailboxes in Baraboo, Reedsburg, and Spring Green, the outlet reported. It is still currently unknown who was behind the nationalist and anti-Semitic flyers. 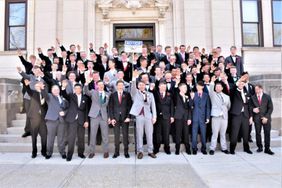 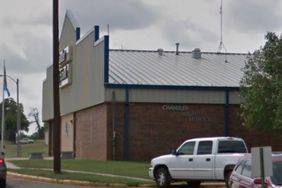