Gwen Shamblin Lara is the subject of HBO Max's new series, The Way Down: God, Greed and the Cult of Gwen Shamblin.

The five part series — the first three episodes of which began streaming on Thursday — follows Shamblin Lara's rise to fame as a weight-loss champion turned religious leader before her death at the age of 66 in a plane crash on May 29.

"Despite a carefully curated image, Lara and the church soon fielded accusations of emotional, psychological, and physical abuse, and exploitation for their alleged cult-like practices," reads an official synopsis for the show, per HBO.

Here are some key things to know about Shamblin Lara, her Weigh Down Workshop and the Remnant Fellowship Church.

Her empire began with the Weigh Down Workshop

Shamblin Lara built a following thanks to the success of her Weigh Down Workshop, a faith-based weight loss program, which was also the subject of her 1997 book The Weigh Down Diet.

"What I do in this program is teach people how to stop bowing down to the refrigerator and how to bow back down to him," Shamblin Lara says in one clip featured in the documentary series, referring to God.

"The basic principles were you can eat whatever you want, no foods are bad. Jesus declared all food clean," Gina Graves, a former member, explains in one episode. "What you did was you waited for physical hunger and you ate until you were satisfied. And the times you weren't hungry, you went to God. You prayed. You gave that desire for the food to him."

Another former member, who initially lost weight, summarized the program by saying"it's simply portion control." Still, the Weigh Down Workshop rose in popularity, thanks in part to Shamblin Lara's charismatic personality, and spread across thousands of U.S. churches.

After early success, she opened a church

"One of her big premises of this church was people out in the world that are doing these classes in these false churches are gaining their weight back," Graves says in the series. "This church is her big savior to help people keep their weight down and stay saved."

"And the faster you do it, the holier you are," adds former member Terassee Morris.

The documentary also includes a look into the 2007 murder conviction of church members Joseph and Sonya Smith, who were sentenced to life in prison for the 2003 death of their son Josef, 8.

Her relationship with Joe Lara raised some eyebrows

Shamblin Lara married Tarzan in Manhattan actor Joe Lara in 2018 — but not before ruffling a few feathers in the church.

For most of her career, Gwen was married to her first husband, David Shamblin.

"When Gwen started doing the Weigh Down workshop tapes back in the late '90s, he was very visible. He was very much a part of it," says former member Richard Morris.

"He definitely did not represent everything Gwen said was right and rigorous. Because he was overweight, so how could he be right or righteous [to her]?" adds another former member, Helen Byrd.

But in order to marry Joe, she had to get a divorce, which she had been against in the past when it came to other church members.

"All of those years you have told people to suffer through their marriage, but then whenever the spirit hits you, you done had a whole change of heart, now it's okay to get divorced," remarks Byrd.

Others raised questions about Joe's intentions.

"When he met Gwen, I feel like he won the lottery and he also was cast in her production," said former girlfriend Natasha Pavlovich, whose custody battle with the late actor over their daughter is also documented in the series.

Pavlovich, who said Joe was working as a handyman and had country music aspirations when he met Gwen, adds of their union: "She's a very wealthy woman so this was a huge opportunity for him."

The couple died in a plane crash earlier this year

Gwen, Joe and five other passengers were killed in a private plane crash in May.

The plane crashed into Percy Priest Lake in Tennessee around 11 a.m. shortly after taking off from Smyrna Airport en route to Palm Beach, Florida, NBC News reported at the time.

The additional passengers — Jennifer J. Martin, David L. Martin, Jessica Walters, Jonathan Walters and Brandon Hannah (the husband of Gwen's daughter Elizabeth Shamblin Hannah) — were all from Brentwood, Tennessee, and were members of Gwen's church, according to News Channel 5.

Afterwards, it was announced that Gwen's children, Michael Shamblin and Elizabeth Shamblin Hannah, would keep the church going. Both are currently still listed as church leaders on its website.

Although production on the documentary wrapped prior to the deadly crash, an additional two episodes — expected to premiere in 2022 — will delve into the accident, its investigation and aftermath, according to The Guardian.

"The [docuseries] producers initially made contact with Remnant Fellowship, its leaders, and ex-leaders in January 2021, inviting them numerous times over the course of eight months to respond directly to the various allegations made by interviewees during the course of filming," reads text near the end of episode 3. "On September 14th, 2021 — two weeks before the documentary series was due to air — the Church finally issued a formal statement."

Part of that statement is as follows, per the producers: "Remnant Fellowship categorically denies the absurd defamatory statements and accusations made in this documentary. Our Christian beliefs, like hundreds of other churches in the United States, are Bible-based, and our church is based on love, care, mercy, and kindness shown to people from all walks of life."

"Children are happy and healthy, being raised with the most love, care, support, and protection imaginable," the church added. "Thousands have said that their lives have benefited from the mere-Christianity message of Remnant Fellowship and the Weigh Down Ministries, but we know that there is no one message that can ever please everyone."

The statement continued, "As any other church, Remnant Fellowship operates under all U.S. guidelines and laws."

The Way Down: God, Greed and the Cult of Gwen Shamblin is currently streaming on HBO Max. 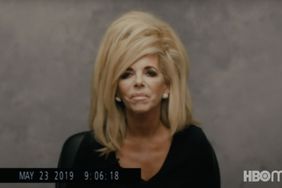