From Empty Streets to Virtual Weddings: What Life Has Looked Like During the Coronavirus Pandemic

An employee filled bottles with hand sanitizer on March 27, 2020, at Old World Spirits in Belmont, California, where they shifted from making gin and absinthe to making hand sanitizer.

A Sydney couple, Lara Laas and Daniel Clark, posed with hand sanitizer as they were married at Captain Henry Waterhouse Reserve in Sydney, Australia, on March 28, 2020.

Two medical residents married after coronavirus forced them to postpone their plans. Instead of a traditional wedding, Shelun Tsai, an OB/GYN resident at Duke University School of Medicine, and Michael Sun, a Duke psychiatry resident, celebrated with an impromptu ceremony, complete with paper bouquets and a makeshift wedding dress.

The Department of OB/GYN at Duke University School of Medicine shared photos of the gathering, and said that the couple's family and friends tuned in via Zoom.

"It was a celebratory commemoration with vows and joy!" the department wrote on Twitter. "Future official wedding will be upcoming."

A New York City public school teacher remote taught on her laptop from her roof on March 24, 2020, in N.Y.C.

Volunteers packed up boxes of food to be distributed to those in need at the distribution center of the Capital Area Food Bank on April 9, 2020, in Washington, D.C.

Babies were being protected in an effort to halt the spread of the COVID-19 coronavirus at Praram 9 Hospital in Bangkok.

A member of the Spanish Red Cross distributed face masks in Madrid, Spain, on April 13, 2020.

A woman carried her shopping bag and an Easter egg across Piazza della Rotonda on April 11, 2020, in Rome.

Empty store shelves were seen in a supermarket in N.Y.C. as people stocked up on food and other essential items, fearing supply shortages.

People watched a drive-in Easter service from the safety of their cars in Erfurt, Germany, while Pastor Christoph Knoll read a sermon.

Andrea Bocelli performed a record-breaking concert in the empty Duomo in Milan, Italy, on Easter Sunday 2020.

Senate Majority Leader Mitch McConnell spoke with reporters from a socially safe distance outside the Senate chamber on Capitol Hill in Washington, D.C., on April 9, 2020.

An aviation officer checked a passenger's temperature on March 16, 2020, at the arrival terminal of Adisucipto International Airport in Yogyakarta, Indonesia.

Police in Florida rescued a German shepherd that was left on a boat when his owner was hospitalized with COVID-19 symptoms. The Sheriff's Office wrote on Facebook that they made the rescue after the owner called them to make a "desperate plea" to take care of his dog.

Shoppers used masks and gloves while grocery shopping in Miami on April 5, 2020.

In Las Vegas, a temporary homeless shelter was set up outside, where people slept in socially distanced boxes in a parking lot.

When a homeless man tested positive for the contagious respiratory virus, a local shelter operated by Catholic Charities temporarily shut down. In response to the closure, the city and Clark County officials worked to provide space for the nearly 500 people in need of overnight shelter, keeping in mind the parameters for social distancing. 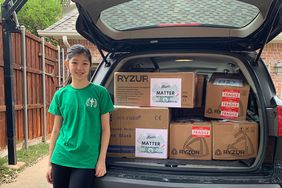 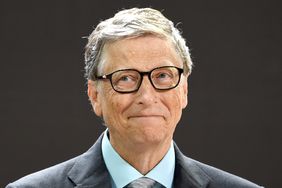 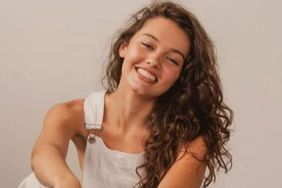