The group said they removed the structure "because there are clear precedents for how we share and standardize the use of our public lands, natural wildlife, native plants, fresh water sources, and human impacts upon them"

Much to the disappointment of the internet, the mysterious monolith that recently appeared, then disappeared, from a Utah desert was whisked away not by aliens, but by a group of regular old humans, according to two photographers who say they watched it happen.

The metal structure was removed via wheelbarrow in a nighttime mission by a group of four unidentified men just five days after its existence was announced, Denver-based photographer and witness Mike Newlands told ABC News.

“We were shell shocked. We were like, ‘Holy smokes,’” Newlands said. “It was like watching an internet meme die in real life.”

Newlands said he traveled to the Red Rock desert with three other people, including photographer Ross Bernards, in order to catch a glimpse of the mysterious object on Friday night, and was gathered around it when the group of four men approached.

He said the group kept to themselves, though he did hear them refer to the structure as “litter.”

Bernards relayed a similar story to CNN, and said the group pried the structure loose with three big pushes.

“It fell onto the ground with a bang,” he said. “Once that happened, one of them said, ‘This is why you don’t leave trash in the desert.’”

He said the men broke the structure into four pieces and rolled it away in a wheelbarrow as they called out the phrase, “Leave no trace.” The photographer explained that the phrase is well known within the outdoor community, and encourages people to minimize their personal impact on the environment.

“It was a cool thing to see, but it also just needed to go,” Bernards said, noting that he didn’t stop the group because he agreed that the structure did not belong there. “The wilderness areas – Mother Nature is the artist up there and we need to leave the art to her.”

A TikTok user named Sylvan Christensen has since taken credit for the removal, and shared a video that shows a group lugging parts of the metal structure away at night with their faces blurred.

“Don’t abandon your personal property on public land if you don’t want it to be taken out #utahmonolith #leavenotrace,” he wrote in an Instagram caption.

While Christensen did not immediately respond to PEOPLE’s request for comment, a statement from the group to CNN explained the thought behind its hasty removal.

"We removed the Utah Monolith because there are clear precedents for how we share and standardize the use of our public lands, natural wildlife, native plants, fresh water sources, and human impacts upon them," the statement said. "The mystery was the infatuation, and we want to use this time to unite people behind the real issues here — we are losing our public lands — things like this don't help."

The monolith’s origins remain unknown, though the San Juan County Sheriff’s Office said earlier this week that it would not investigate its installation or its removal, as they “do not have the proper resources” to devote much time to it.

Still, the structure was illegally placed, and the Bureau of Land Management (BLM) has discouraged visitors from trying to visit it.

The BLM said that “a relatively large number of people” tried to track it down after it was revealed on Nov. 23, and that the unwelcome visitors parked on vegetation and left behind human waste during their trips.

The area has no parking lots, restrooms or cell service, and is not meant to welcome visitors.

Bernards estimated that he saw about 70 or 80 cars in the area during his trip, according to Fox affiliate KSTU.

Meanwhile, a similar monolith was discovered thousands of miles away in Romania on Nov. 26 in the city of Piatra Neamt, ABC News reported.

Just like in Utah, however, it disappeared less than a week later.

"It was facing Mt. Ceahlau or the 'Holy Mountain' as we call it. So, maybe it was used in some ritual," Rocsana Josanu, the city’s culture and heritage official, told ABC News. "We are looking into it." 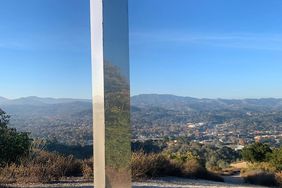 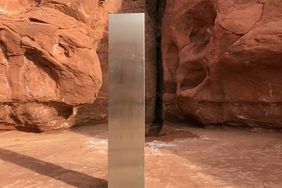 Raided! Inside the Polygamy Sect 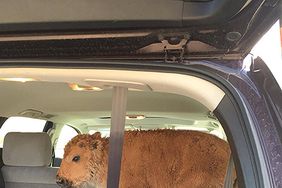