A Sick Proposal: Man Pops the Question to Shocked Nurse Girlfriend After He Fakes an Illness

A New Jersey woman got the surprise — and the scare — of a lifetime when her boyfriend was wheeled on a stretcher into the hospital where she worked earlier this month.

Tom Ciancia, who has a peanut allergy, arrived at the Monmouth Medical Center on Sept. 17 in Long Branch in the back of an ambulance — much to the surprise of his girlfriend, Lauren Trulli, an emergency room nurse.

But the ruse was all part of Ciancia’s master plan, as he pretended to stumble as he climbed off the stretcher, the station reports.

“This was the best way to surprise you,” he told Trulli as he dropped down to one knee.

The lovebirds embraced as those around them applauded.

“Today we did something truly special for two people! We would like to congratulate Tom and Lauren on their engagement!” fire squad officials wrote in a Facebook post. “We helped Tom propose by ‘scaring’ Lauren into saying yes! #shesaidyes #laurenandtom.” 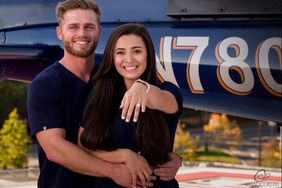