The teenager is now reportedly in a medically induced coma

A 14-year-old Texas teenager was put into a medically induced coma after he was sucked into a water park drain on Saturday.

“We have taken a report of a 14-year-old male that suffered an injury from a drain at the water park,” a spokesperson for the Galveston County Sheriff’s Office told PEOPLE. “When first admitted he was in a medically induced coma.”

According to KTRK, the incident occurred at the Fun Town Water Park in Crystal Beach, Texas. The outlet reported that the teen was sucked inside the drain after picking up a grate in the pool.

“From my understanding, it might have been on a dare,” Galveston County Sheriff Henry Trochesset told the outlet. “He’s a large, 14-year-old, my size, 5’11”, and he picked it up, and when he did that, he slipped into the intake.”

“Even after they turned the pump off, there was still a suction keeping him down,” Trochesset said.

The teen was eventually able to escape, but suffered serious internal injuries and was rushed to a local hospital, according to KTRK.

Fun Town Water Park had no comment when reached by PEOPLE on Friday morning.

“He told his dad, ‘I love you, sorry it happened,’” Trochesset told KHOU. “He was able to stand up. They walked him away from the area to the gurney to get into the ambulance.”

KHOU reports that the boy was put into a medically induced coma at the hospital.

“Sad, tragic situation for the family,” Trochesset told KTRK. “I hope he’s doing well. Prayers are going to be needed.”

Hawaiian Surfer, 16, Survives Shark Attack After It Takes a Bite Out of His Surfboard

The sheriff’s office is still investigating the incident and looking into how to secure the grate that the teenager picked up.

“Is there a way to put a lock on it, or some kind of device that screws it down so somebody is not able just to pick it up so easily?” Trochesset said to KTRK.

The teenager was identified by KHOU as Caden Strimple. A GoFundMe page set up to help Caden’s family says that he is in “critical condition” and “will have more surgeries in the next few months.”

In a Facebook post, Fun Town Water Park said they would be hosting a fundraiser for Caden’s family.

“Aug. 26 is the first day of school for the kids of the peninsula and most of the surrounding areas,” the water park wrote on Facebook. “There is a young man, Caden Strimple, that is not going to be able to make that first day.” 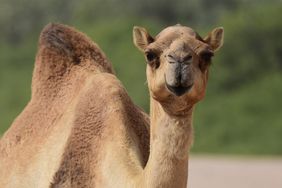