Charlie Lagarde decided to celebrate turning 18 like many other Canadian teens: by purchasing a bottle of sparkling wine and her first-ever lottery ticket

Charlie Lagarde decided to celebrate turning 18 like many other Canadian teens: by purchasing a bottle of sparkling wine and her first-ever lottery ticket at a convenience store. Little did she know that she would strike a jackpot of 1,000 Canadian dollars (775 US dollars) per week for life.

According to Loto Québec, the teen scratched off the Gagnant à vie! ticket when she got home and discovered that she had won the grand prize. She immediately told her family, who were “euphoric” about the exciting news.

Lagarde opted to collect the weekly payout rather than the lump sum of a million Canadian dollars after consulting a financial adviser, according to The Star.

“It’s without taxes so it’s equivalent to a salary of more than $100,000 a year, so it’s a great start in life for that young lady,” lottery spokesman Patrice Lavoie told the outlet.

The Montérégie resident plans to use the money to travel and pursue the study of photography.

“One of my dreams would be to work for National Geographic,” she told Loto Québec.

“She’s so sweet, down to earth, grounded,” he said. ” She loves to travel. So she bought herself a really nice camera.”

If Lagarde takes a cue from Rosa Dominguez, she may want to buy another ticket. The 19-year-old bought lottery tickets last year while pumping gas in San Luis Obispo County, California and won the top prize of $555,555. A few days later, Dominguez decided to test her luck another time, and it paid off enormously. A $5 Lucky Fortune Scratcher from a local Valero gas station in Greenfield was another winner to the tune of $100,000, bringing the total winnings of her epic week to $655,555. 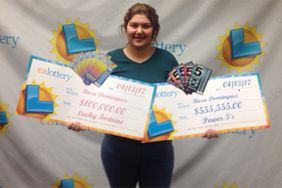 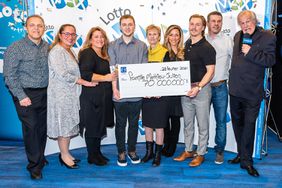 Can Winning the Lottery Make You Feel Like a Million? Yes and No

No Longer the Biggest Lottery Winner Ever, a Chicagoan Reclaims a Different Prize: His Privacy