From Marvel to the Vatican! Spider-Man Meets the Pope: 'A Really Good Superhero'

Mattia Villardita, the man behind the Spider-Man mask, was given a VIP spot at the Vatican due to his visits with sick children in hospitals

Spider-Man took a break from fighting crime this week to visit Pope Francis at the Vatican.

During the Pope's weekly papal audience on Wednesday, an attendee dressed as Spider-Man was spotted in the VIP section of the Vatican's San Damaso Courtyard, according to Reuters.

The papal audience is held each Wednesday when the Pope is in Rome and gives visitors a chance to see and interact with the Pope as he delivers small teachings, readings and prayers, per PapalAudience.org.

Wearing the full costume of the beloved Marvel superhero, including the skin-tight, red bodysuit and head covering, Spider-Man — whose identity was later revealed to be Mattia Villardita — sat quietly beside a priest and listened to the Pope's service, Reuters reported.

At the end of the papal audience, Villardita, 27, got the chance to personally meet the Pope.

In a photo that appears to be straight out of a movie, Pope Francis was captured greeting Villardita and happily shaking his hand. During their exchange, Villardita also gifted the Pope a Spider-Man mask, which seen in the Pope's hand in the image.

According to Reuters, Villardita, of Northern Italy, was invited to the audience as a VIP guest for his work of dressing up as Spider-Man and visiting sick children in the hospital.

Later that day, Villardita was set to visit the Vatican's pediatric hospital to bring smiles to the children's faces — but not before he snapped some selfies with younger audience attendees, the Associated Press reported.

Speaking to the AP about his encounter on Wednesday, Villardita explained that he gave Pope Francis one of his masks "as a sign, to tell him that through these eyes, I daily see pain from sick children in hospitals."

"It was very exciting because Pope Francis immediately understood my mission," Villardita added to the AP.

This wasn't the first time that Villardita was honored for his work.

Last year, Italy's President Sergio Mattarella presented Villardita with an award for bringing joy to children in the hospital, according to Reuters.

Villardita told the Vatican he made more than 1,400 video calls to children in the hospital over the last year since he wasn't able to visit in person due to the pandemic, the AP reported.

The Vatican later described him as "really a good super-hero," per the AP. 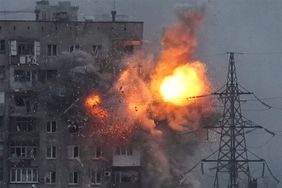 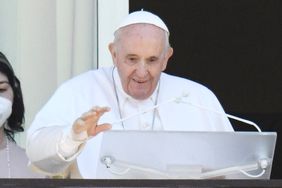 With a Wisp of White Smoke from the Sistine Chapel, Perhaps One of These Men Will Be Pope