Tragedy struck early Thursday morning near Miami when a wing of Champlain Towers South Condo, a 12-story condominium building in Surfside, suddenly collapsed. The crash, which happened around 1:30 a.m., killed at least four people, the Associated Press reports. Now, a massive search-and-rescue mission is currently underway for survivors at the ocean-facing high-rise. As of Friday morning, 159 remain missing.

President Joe Biden approved an emergency declaration for the state, with FEMA on the ground to respond to the tragedy, CNN reported. The president is expected to issue an address later today.

A GoFundMe for victims is live, where over $80,000 has been raised to date. A spokesperson for the local emergency information hotline tells PEOPLE that donations to the South Florida chapter of the Red Cross and Surfside Recreation Center are welcome during this time.

Surfside Commissioner Eliana Salzhauer tells PEOPLE that the Red Cross has been busy on the ground giving immediate assistance to survivors and displaced residents, providing food, shelter, clothing and transportation.

A spokesperson for the town of Surfside also tells PEOPLE that those interested in donating or volunteering can submit an online registration form. The Shul Jewish Community Center is accepting donations to help families, while the Jewish non-profit organization Cadena Foundation is seeking donations of essential supplies as well as monetary funds.

As the South Florida community rallies together, World Central Kitchen, Direct Relief and the Miami Heat Charitable Fund are delivering hot meals via food trucks to displaced victims. Donations can be made here.

Anyone searching for loved ones who may have been in Champlain Towers South, or to report them as safe, is urged to call the reunification hotline at 305-614-1819.

"The building is literally pancaked," Surfside Mayor Charles Burkett told the AP Thursday, warning that the death toll will likely, tragically, rise. "That is heartbreaking because it doesn't mean to me that we are going to be as successful as we wanted to be in finding people alive."

As the search for survivors continues, the cause of the collapse remains unknown. During a Friday press conference, the Miami-Dade Police Department confirmed an investigation is ongoing.

During the briefing, Miami-Dade Fire Rescue Chief Ray Jadalla said officials "have hope" for finding survivors within the debris, as they focus rescue efforts on areas they have heard sounds.

Rubble and debris hang from the collapsed structure of the beachfront high-rise.

NBC 6 reports that Champlain Towers South was built in 1981, home to over 130 units.

Mayor Burkett told CNN that the residential building was undergoing roof work, though it remains unclear if that factored into the collapse.

It also remains unclear how many individuals were inside the condominium building at the time of the early morning collapse.

So far, 120 people have been accounted for, NBC reported on Friday.

Meanwhile, a professor at Florida International University has come forward to claim that the building, constructed in 1981, has been sinking since the 1990s.

Shimon Wdowinski, a professor in the Department of Earth and Environment at the college, said his 2020 study of the site "detected" the collapse of the 12-story high-rise, USA Today reported. Wdowinski said the study indicated the building was sinking 2 millimeters a year in the 1990s, noting, however, the rate could have slowed or accelerated in the years since.

Nevertheless, Wdowinski and Florida authorities say it's too soon to draw conclusions on the possible cause of the collapse.

"We will continue search and rescue, because we still have hope we will find people alive," Mayor Levine Cava stressed during Friday's press conference.

Champlain Towers South was undergoing a standard recertification process, involving electrical and structural inspections, at the time of the tragedy. The process had not yet been completed.

As the community comes together in the wake of the catastrophe, a "Surfside Strong" hangs on a local balcony as search and rescue operations continue.

A man takes a knee to pray before the devastated Champlain Towers South Condo building on Friday. He told Getty Images that he lost a family member in the collapse.

Lightening strikes above the partially collapsed building in Surfside on the evening of June 24. As rescue crews searched for survivors, loved ones of those missing in the building waited to hear for news.

Firefighters from Miami-Dade Fire Rescue put out a fire at Champlain Towers South on Friday as the intense search and rescue mission continues.

"I have to implore everybody: Just pray," said County Commission Vice Chairman Oliver Gilbert at a press briefing, per CNN.

An aerial visual of first responders working at the beachfront Florida apartment building. With 159 people still unaccounted for, the AP reports that the rescue mission could go on for days. 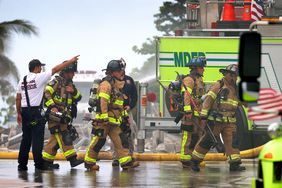 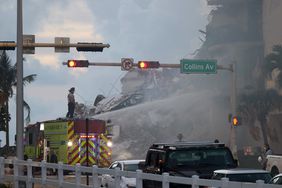 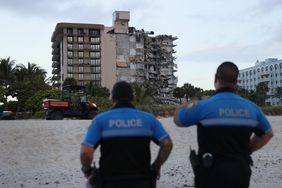 $5 Million Lawsuit Filed in Wake of Miami Condo Collapse: We Believe 'This Was Preventable' 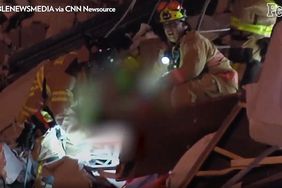 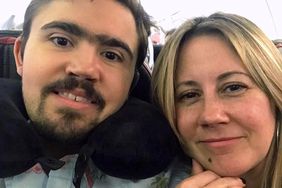 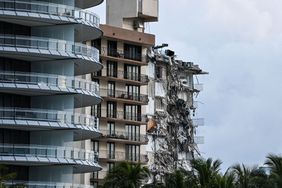 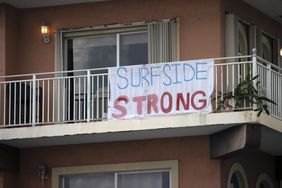 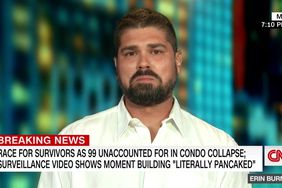 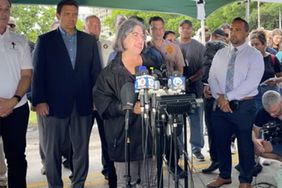 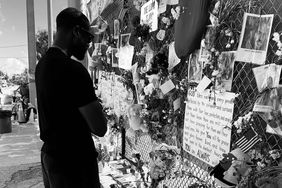