VIDEO: Parents Explain Why They Allowed 6-Year-Old to Identify as Transgender

When Jeff and Hillary Whittington were told their first child would be a girl, they immediately picked out a name and began decorating the nursery accordingly. But within a year after their little Ryland was born, the couple realized that life was becoming nothing like they planned.

Around the time Ryland turned 1 in 2008, Jeff and Hillary were informed their daughter was deaf and the family began the process of fitting their little one with a cochlear implant.

It was not long after receiving the implant that Ryland began to be able to speak – and she had something to say.

“As soon as Ryland could speak, she would scream, ‘I’M A BOY,’ ” reads the text on the video posted on the Whittington family’s YouTube page. “She began to show aversion to anything feminine.”

At first, the family would refer to Ryland as a “tomboy” but it soon became evident to Jeff and Hillary that their child’s proclivity toward activities and clothing more commonly associated with boys was not just “a phase.”

When Ryland began presenting increased amounts of shame because of how she felt, her parents started researching the statistics of attempted suicide rates among transgendered people and were alarmed to find that they were more than 10 times the national average. It was then that the couple decided to fully embrace Ryland’s identity.

“She said, ‘When the family dies, I will cut my hair so I can be a boy,’ ” the seven-minute video says. “Through tears, she asked, ‘Why did God make me this way?’ ”

Despite the fact that the family knew it would lose a few friends, they sent a letter to those close to them stating that Ryland would now be referred to with male pronouns and was allowed to cut his hair and wear boys’ clothes.

“Ryland’s gender identity was not caused by our parenting style, family structure or environmental factors,” says the video.

The Whittington family was honored at the 6th annual Harvey Milk Diversity Breakfast in San Diego on May 22, but Jeff and Hillary – who are also raising Ryland’s younger sister, Brynly – do not think they are the only parents who have sacrificed and made changes to better the lives of their children.

“Relative to the horrific things people have to endure with their children all over the world, this is nothing,” they add in the video, which was posted May 27 and received almost 400,000 views in less than three days.

From Girl to Boy 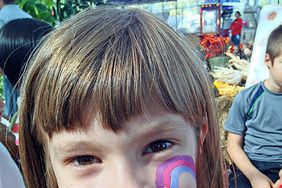