While fleeing from the rising waters in his North Carolina neighborhood on Friday, Robert Simmons Jr. made sure to leave with his kitten

While fleeing from the rising waters in his North Carolina neighborhood on Friday, Robert Simmons Jr. made sure to leave with his kitten, aptly named “Survivor.”

In a photo shared on Friday by North Carolina’s News & Observer reporter Andrew Carter, Simmons sat in a rowboat while the kitten, who was visibly drenched, perched on top of his shoulder.

Explaining the story behind the photo, Carter wrote, “Meet Robert Simmons. Was stuck in his house since last night, when floodwaters began to rise in New Bern. A boat came and rescued him just now. He was sad to leave his father but left with his kitten hugging his neck.”

In a separate post, Carter went on to explain that while Simmons “wanted his father to leave on the boat…his father wanted to stay behind.”

“There was probably about a half-mile of waist-deep water between their place and the street that led out of the neighborhood,” Carter continued.

The photo has since gone viral, having been liked over 18,000 times.

In an interview with Carter for The News & Observer, which was published on Saturday, the resident of New Bern called himself “an animal lover.”

He went on to explain that while the kitten’s mother was also present during the flooding, he didn’t bring her with him because “she’s a wild cat.”

Explaining why the kitten had taken such a liking to him, Simmons laughed while remarking, “I feed him.”

The slow-moving storm — which began at sea as a Category 4 hurricane, made landfall as a Category 1 hurricane on Friday, and has since been downgraded to a tropical storm — was parked over eastern North Carolina on Saturday, FEMA said in a press conference.

As of Saturday afternoon, Florence has caused 11 deaths, according to the Associated Press.

Florence’s first two casualties were reported on Friday in Wilmington, North Carolina, when a tree fell through the roof of a home with a family of three inside at about 9:30 a.m., killing a mother and her 8-month-old infant. According to officials with the Wilmington Police Department, who confirmed the death in a statement to PEOPLE, the father was taken to the hospital with injuries.

One woman in Hampstead, North Carolina, died of a heart attack when first responders weren’t able to reach her in time “because of all the downed trees in the roadway,” Pender County public information officer Tammy Proctor told PEOPLE in a statement. “They were using a front-end loader to clear the roads. During that, a tree went into the windshield of that equipment.”

Thank God They Came’ — Inside the Daring Rescues of Hurricane Florence

Lenoir County Sheriff Ronnie Ingram said in a video update on the Lenoir County Emergency Services Facebook page on Friday that two people had died, both when they were outside in the rain. One was a 78-year-old male who was electrocuted in the rain as he tried to plug in his generator via two extension cords. Another was a 77-year-old man who suffered a cardiac arrest after he slipped and fell while trying to take care of his dogs.

On Saturday afternoon, the Duplin County Sheriff’s Office went on to issue a statement on its Facebook page, sharing that “as of 1:30 p.m. on September 15, 2018, Duplin County has had 3 fatalities due to flash flooding and swift water on roadways.”

“The flood danger from this storm is more immediate today than when it made landfall just over 24 hours ago,” North Carolina Gov. Cooper said, according to a press release issued on Saturday. “More people now face imminent threat than when the storm was offshore. I cannot overstate it: Flood waters are rising. If you aren’t watching for them, you are risking your life.”

“If you are told to evacuate, please do so immediately. It could save your life,” he continued.

The National Weather Service reported on Saturday that a record 30.58 inches of rain was recorded in Swansboro, North Carolina — making it the most rain from a tropical cyclone. Those numbers are expected to rise throughout the day.

Forecasters are also anticipating landslides near the Appalachians, the National Weather Service reported. 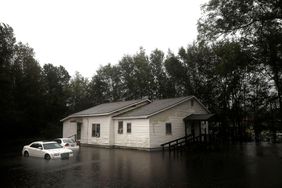 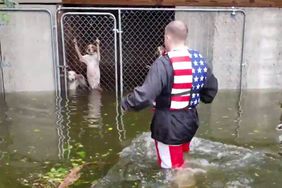 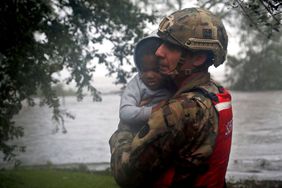 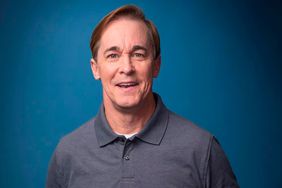 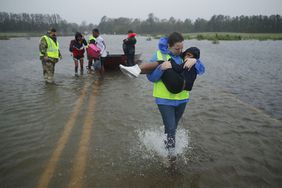 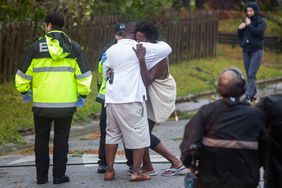 N.C. Mom and Infant Among First Fatalities of Hurricane Florence After Tree Falls on House 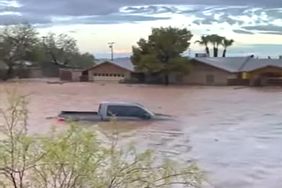 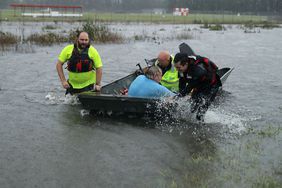 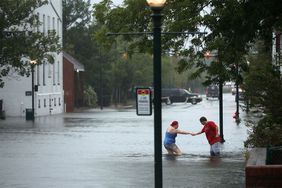