Newlyweds Sarah and Evan Carroll of Charleston, South Carolina, were enjoying their honeymoon in the Caribbean on Friday when tragedy struck.

Sarah, 25, was swimming with sharks as part of a resort attraction when one suddenly attacked her as she swam underwater.

And Evan captured the frightening ordeal on video.

“I felt a strong whoosh of water, something clamp down on my arm and assumed my husband was playing a prank on me,” she tells PEOPLE. “Less than a second later I realized how much it hurt and looked … to see the shark latched onto my arm.”

“I was completely shocked and naturally frightened and in pain from the bite,” she adds.

Video footage of the incident shows the shark suddenly bite Sarah before she pulls her arm loose and swims away. She shared photos of her injuries on Facebook, with her arm appearing bloodied and bruised with teeth marks. In another, Sarah showed off her bandage.

“Ended the honeymoon with a bang (bite),” she wrote of the incident in a Facebook post. “Check out the surprise and very rare nurse shark bite in the video and don’t forget the volume to hear the crunchhhh.”

Evan sprang into action after the attack, and applied pressure to Sarah’s wound with a towel.

“Evan is the calmest person I know so he handled everything great. He calmly got me out of the water and helped with first aid,” Sarah says of her husband. “He was nervous getting me out of the water because the nurse shark did come back around and circled us after the bite.”

She and Evan, who wed in October, returned to the U.S. three days after the incident. 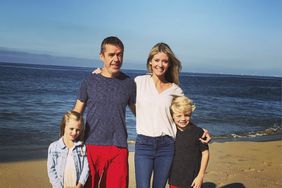