"We definitely got to make sure she got to go home and see dad today," Michael Quinlan said of rescuing the driver

A woman survived a potentially deadly car crash on Father's Day thanks to three bystanders in a Massachusetts neighborhood.

Charles Smith, Michael Quinlan and Hailey Smith all jumped into action on Sunday when they discovered that the driver had slammed her vehicle into a tree outside the Rockland home they were at, WATD 95.9 News & Talk Radio reported.

Together, the trio was able to pull the woman from her smoking vehicle within seconds of it bursting into flames. She is now being treated at South Shore Hospital in Weymouth with serious, but non-life-threatening injuries, according to the radio station.

"The experience was incredible," Quinlan told WATD after their heroic rescue.

The incident unfolded just before 3 p.m. on Hingham Street, according to a tweet from the Rockland Fire Department.

Charles told WATD that he and Quinlan heard a loud bang and went outside to find the crushed silver SUV. Inside the vehicle was the driver, who Charles said was in her 20s and appeared to be alert and conscious.

"I figured 25 feet was far enough away in case there was an explosion," he noted, adding that in the meantime, his "daughter Hailey called 911."

Less than a minute after Charles managed to pull the woman from her smoking vehicle, Quinlan said the SUV and surrounding area was engulfed with flames.

"It was 45 seconds after the crash, and the fire was burning into the trees," he recounted to the radio station.

The Rockland Fire Department (RFD) confirmed on Twitter that they responded to the Father's Day incident, writing, "The SUV caught fire and neighbors helped pull the victim out. Firefighters treated the victim and quickly extinguished the fire."

They also posted a series of photos from the crash site, showing the SUV on fire, as well as the damage to the car after the flames had successfully been put out.

At the time of the tweet, fire officials said "the patient was transported to SSH [South Shore Hospital]" and that "no further information is available," but RFD Lieutenant Dave Cowing later confirmed the extent of the woman's injuries to WATD.

The cause of the crash remains under investigation, according to Boston television station WHDH.

As for the heroic neighbors, they told WATD that they were happy to help the woman survive the incident — but perhaps even more so because of the day that the crash occurred.

"We definitely got to make sure she got to go home and see dad today," Quinlan proudly said. 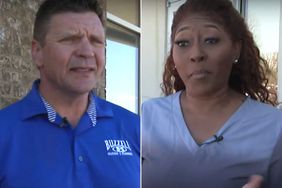 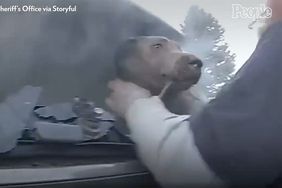