'Katrina Girl' Found! Airman and the Girl He Rescued During the 2005 Hurricane Will Finally Be Reunited

Air Force Pararescue Jumper Mike Maroney had just returned from a devastating rescue mission in Afghanistan when he was called to New Orleans in September 2005 in the wake of Hurricane Katrina.

Maroney and his team spent seven days descending on rooftop after rooftop, rescuing stranded residents around the city, a grim task that left him wondering how many would actually survive.

One of the few bright spots was an adorable, pigtailed three-year-old girl, who greeted the soldier with a big, joyous hug after she and her family landed in his helicopter.

That hug “recharged me and gave me a little bit of a silver lining and some hope that kept me going through rough times,” Maroney, 40, now an Air Force Reservist who teaches people how to become pararescue jumpers in San Antonio, Texas, tells PEOPLE exclusively. “It couldn’t have come at a more important moment.”

Maroney, who never got the little girl or her family’s names, has been searching for her ever since – and he’s finally found her, he tells PEOPLE.

Her name is LeShay Brown, she’s now 13 years old and she lives with her family in Waveland, Mississipi. The two will reunite in New Orleans later this month.

“I can’t wait to meet her to tell her how important she is,” he says.

“In my line of work, it doesn t usually turn out happily,” he says. “This hug, this moment, was like – everybody I’ve ever saved, that was the thank you.”

The hug soon became an iconic image of the rescue efforts in the hurricane-ravaged town, thanks to a military photographer who snapped a photo of the heartwarming moment captured when Maroney dropped them off at the New Orleans airport.

“It was everywhere, on Burger King placemats and AT&T phone cards,” Maroney told the Air Force Times, which first broke the story of his hunt for the little girl in March 2015. “A foundation for fallen rescue airmen – That Others May Live – used it on their brochures.”

While LeShay doesn’t remember the hug herself (she was too little), her mom remembers every moment of that meeting – as ironically, LeShay was comforting her as well.

“The helicopter had open doors, so I looked out and you could just see all the water over everything,” she says, “and it was just too much for me, so she was comforting me.”

Shawntrell, who says her three-year-old was “so smart, and always talking” knew the hug had been captured on film, but never found out what happened with it.

“They told me the picture might be in a magazine, but after all that time, I forgot about it,” she explains. She had other things on her mind.

After Maroney brought the Browns to the airport, they were transferred to Tennessee.

“We didn’t even know where we were going, but at that point, it didn t matter,” she says. “Someone was there to help us.”

Neither of them were aware of Maroney’s search until recently – which was not surprising to Maroney, who said he knew the chances of finding her were slim.

“I figured one in a trillion,” he says. “I thought it never would have happened.”

And it almost didn’t.

A Twist of Fate

Through the years, Maroney kept posting about his efforts to find the little girl on his personal Facebook and Instagram pages.

But it wasn’t until a high school student in Waterford, Michigan got involved that his search gained traction.

16-year-old Andrew Goard – whose grandfather was in the military police in Vietnam – has a fascination with pararescue jumpers and even launched an Instagram page to honor them.

After being alerted to Maroney’s search by other jumpers on his page, Goard decided to take on the cause himself “because Mike had 18 years of service and he had never really been thanked for his service,” he tells PEOPLE.

The high schooler used his page (which at the time had roughly 3,000 followers) to launch the #FindKatrinaGirl campaign in February 2015, which was then seen and written about by the Air Force Times, and picked up by hundreds of news outlets.

One of those was near where LeShay now lives – and so the #FindKatrinaGirl campaign finally made its way to the little girl herself.

“The whole neighborhood told us they saw LeShay on the news and everybody told us someone was looking for her,” Shawntrell says.

After she saw the picture herself, “I knew that it was her,” she says. “I didn t know he still remembered it, that he was that moved by her.”

She reached out to Maroney and, later this month, he will finally meet up with the little girl who started it all.

And LeShay (who plans to be a lawyer or basketball player when she grows up), is ready for the big reunion herself.

“I was excited that he was looking for me for such a long time,” she tells PEOPLE. After all, she exclaims, “I’ve barely seen any of the pictures!” 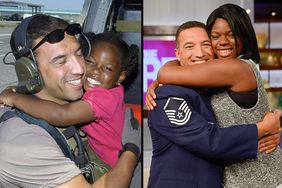 'Katrina Girl' to Bring Air Force Vet Who Rescued Her During 2005 Hurricane to Junior ROTC Ball: 'I Would Do Anything to Repay the Hug,' He Says

After 10 Years Search, Air Force Vet Has Emotional Reunion with 'Katrina Girl' He Saved: 'You Rescued Me More Than I Rescued You' 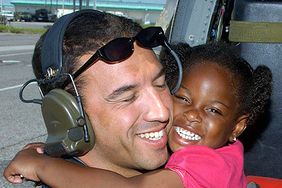 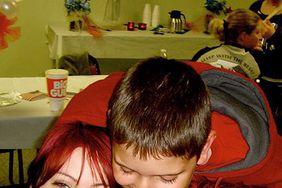 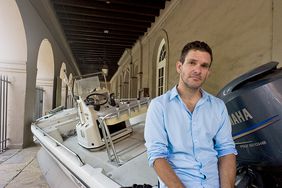 'The Boat That Saved 400': How One Man Saved Hundreds of Lives During the Aftermath of Hurricane Katrina