Saluting the actors and activists who are making a difference

The Law & Order: SVU star trained as a rape crisis counselor and in 2004 started her own nonprofit organization, the Joyful Heart Foundation, to support survivors of domestic violence and sexual assault. In 2010 Joyful Heart moved beyond its initial goal of providing therapeutic resources to tackle a problem that outraged 56-year-old Hargitay: the backlog of rape kits that sit untested in practically every state, wasting evidence that could put predators behind bars. "These women … need to be respected, and seen and heard," she tells PEOPLE.

While working on her master's degree in Chicano studies from California State University, Longoria, 44, commissioned a study from UCLA, and the research showed a lack of Latinas in STEM (Science, Technology, Engineering and Math) fields. So she launched the Eva Longoria Foundation in 2012 to help provide Latinas with entrepreneurial training and education support, specifically in STEM. "Now that I'm a mom, I feel more urgency," she tells PEOPLE. "I'm making sure that this world is a good place for [my son] to grow up."

After spending 328 days aboard the International Space Station, she landed back on Earth in February, setting a new record for the longest single spaceflight by a woman. "I feel incredibly privileged to have been a part of this," says the 41-year-old, who passed the previous record held by her mentor Peggy Whitson. "Thinking back to a year in your life and being able to contribute as much as I have had the opportunity to has just been awesome."

After one of her teachers noticed Blunt's stutter disappeared whenever she would launch into impersonations as a child, he suggested she audition for the school play. She found that the more she lost herself in characters, the less self-conscious she was and the more her stutter would diminish. Now the star aims to help kids going through the same thing by working with the American Institute for Stuttering. "They understand that how these kids relate to their stutter is usually the issue," says Blunt, 37. "You've got to fall in love with the fact that you've got a stutter to accept it. But it's not all of you. Everyone's got something - and this is just your thing."

In 2004, Bazzy left her job as a transcultural nurse to focus full-time on her Michigan-based nonprofit, which she called Zaman. At first she offered food, clothing and help finding housing to women who were often refugees and domestic-abuse survivors in severe poverty, but quickly realized women needed a "one-stop center" to truly get back on their feet. She opened one and began offering education and skills training. "You throw them a life jacket, and then you have to really anchor them," the 59-year-old says.

The Olympic gymnastics star has a way of handling fear: by facing it head-on. And that hard-won confidence has only furthered her impact beyond her sport. Last year Biles, 22, bravely stood up with her co-athletes to describe her abuse by convicted sexual predator Larry Nassar. Since then she's become an outspoken voice for change within U.S.A. Gymnastics. Now, as she heads to the Tokyo Games, she remains intensely focused - and favored to add five gold medals to her overall collection. "It's taken a lot for me to be confident in who I am, how I look and what I do to this day," she says, adding, "I just want to encourage other kids to pursue their dreams."

When passing homeless shelters in downtown Portland, Oregon, as a high schooler, Okamoto would often ask women what they needed the most. The answer? Period supplies. "I had [never] heard about period poverty," the 22-year-old, now a Harvard junior, tells PEOPLE. "I was not able to stop thinking about it." She started researching the issue and couldn't find any organizations addressing the problem, so at age 16, she started her own, called Period. She started small, getting her friends to help pack feminine hygiene products for women on the streets and in homeless shelters. In five years the organization formed more than 600 chapters in all 50 states and 30 countries.

In 2012 Awkwafina had her first paid gig - a rap performance at Sarah Lawrence College. "It wasn't good," she recalls to PEOPLE, "but the kids were very supportive. [Afterward] this girl came up to me and said, 'Thank you for existing, because I never thought there would be someone like you.' " Awkwafina, whose real name is Nora Lum, still thinks about that moment a lot. "We need to see ourselves when we're growing up," the 31-year-old says. The first Asian woman to win best actress at the Golden Globes, she's now producing and starring in the new Comedy Central show Nora from Queens, and is using the opportunity to hire newcomers to write and direct.

Hyman cofounded fashion rental company Rent the Runway in 2009, and has watched it grow since, pushing the company's value to $1 billion last year. But then a new inventory system crashed, and the company had to stop accepting new customers right before the busy holiday season. Hyman personally responded to the complaints and rolled up her sleeves to pack orders. Though other retailers - from Loft to Banana Republic - have been racing to get into the rental game, Hyman isn't fazed. "I didn't start Rent the Runway because I wanted to win," she says (photographed with daughters Aurora, 2.5 and Selene, 4 months). "I want women to feel like the very best version of themselves. When women feel great about themselves, incredible things happen."

In 2015, Oscar and Emmy winner Obaid-Chinoy, 41, teamed up with director and producer Dalton, 45, to tackle the complex ecosystem of college athletics. Their film Student Athlete followed four young male athletes who aspired to make it to the NFL and NBA; it turns a critical eye on the NCAA's rules prohibiting pay for college players - even as colleges and coaches make millions. Produced with LeBron James, the documentary is galvanizing people to take action. Last year California passed legislation allowing college athletes to earn compensation for marketing and endorsement deals, and this week Congress will kick off the Collegiate Sports Caucus to look into the issue. "Sometimes it just takes the perspective of women to change the way people see an issue," says Obaid-Chinoy. 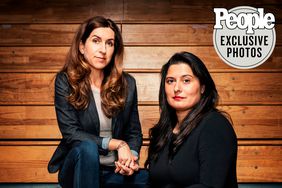 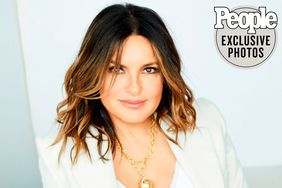 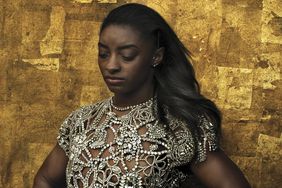