A cause of death has not yet been determined, police said

A man was found hanging from a tree in New York City’s Central Park on Sunday in what police believe may have been a suicide.

Police responded around 6:30 a.m. to reports of an “unconscious male hanging from a tree inside of Central Park,” a spokesperson for the New York Police Department told PEOPLE.

The unresponsive 48-year-old man, who was not identified pending family notification, was found near the bronze Alice in Wonderland statue on the popular park’s east side with a rope tied around his neck, said the spokesperson. Emergency responders pronounced him dead at the scene.

An investigation is ongoing, and the Medical Examiner will determine the man’s cause of death, the spokesperson said.

Police believe the death may have been a suicide, PEOPLE confirms.

It was not immediately clear how long the man’s body was in the tree before someone discovered him and called 911.

According to the New York Post, the man was wearing a black sweatshirt and jeans, and onlookers told the outlet that they noticed police while on their Sunday morning stroll.

“We were taking our normal walk in Central Park and then we saw all these cop cars. We saw them putting a body bag on [and] then we saw the rope,” said one witness, as another added, “It makes you realize how fragile people’s lives are.”

“Sad to have come upon the aftermath of a suicide in Central Park this morning,” they wrote. “A man hung himself from a tree near the Alice in Wonderland statue. Rope and ladder were still there.”

Open from 6 a.m. to 1 a.m., Central Park is a popular tourist attraction that welcomes 25 million visitors a year to its 843 acres of land. 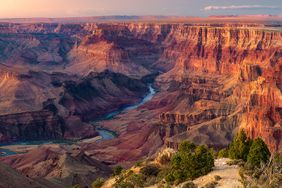 Man Dies by Apparent Suicide After Vehicle Goes Over Grand Canyon Rim: 'We Are Devastated'