Larissa Fletcher lost her husband in October 2016, a year later she became pregnant with their second child

John Fletcher began feeling sick at Christmas time in 2015. The 41-year-old Houston accountant chalked it up to bad reflux, telling his wife, Larissa Fletcher, that he needed to stop eating spicy food.

“My husband said, ‘I don’t want to die.’ I told him, ‘I won’t let you die,’ ” Larissa, who says her father also died of esophageal cancer, tells PEOPLE.

While coming to terms with his diagnosis, John told Larissa he should have bought more life insurance. During their discussions, she told him she wanted to have more children — and John immediately agreed.

“I love babies,” Larissa, a 38-year-old pediatrician at Texas Children’s Hospital, says. “I did not ever think my first baby was going to be my only baby. I wanted to have more.”

The week before John began chemotherapy treatment, he froze his sperm at The Family Fertility Center at Texas Children’s Pavilion for Women.

“The worst week of our lives, the week between diagnoses and treatment starting, he went and banked sperm,” she says. “In that worst, terrible week, he was thinking of the future.”

John responded well to treatment initially. As his health seemed to improve, the couple made plans to return to Maui, where they wed. “John said, ‘No, no, no, you’ll be pregnant at that point!’ ” Larissa recalls.

But then John’s health began to decline. In September 2016, he was sent home from the hospital to start hospice care. That same day, the Fletchers learned from the fertility clinic that they had five healthy embryos.

Dr. Paul Zarutskie, Director of the Fertility Center, says he and his entire staff were inspired by John and Larissa’s “incredible love” during that time.

“It was amazing that no matter how much pain John was in, and how much suffering he was having, he put this joy of having another child with Larissa as number one,” Zarutskie tells PEOPLE.

John died a month later on Oct. 21, 2016. By the next summer, Larissa had begun in vitro fertilization (IVF). She became pregnant in October 2017 — one year after John’s death.

“After John died, my very planned life got turned upside down. That was the last plan John and I made together: We made the plan to have a second child,” she says. “It sustained me going through IVF. This was our plan. I woke up around 24 weeks of pregnancy saying, ‘What the heck did I just do? I’m going to have these two children and it’s just me.’ ”

She announced the pregnancy to her family and friends with an emotional video on Facebook that including John.

“I wanted people to know the whole story. I didn’t want to say, ‘Hey, I’m pregnant.’ It was a big thing,” she says. “I wanted him to be in on the announcement.”

During Larissa’s first birth, John printed a list of jokes to tell his wife, including, “Everybody thought he was adorable, he got more attention than I did.”

She dreaded not having John there for the birth of their second child.

“I didn’t want to have her,” Larissa says. “I wanted to be pregnant forever. I didn’t know how the birth was going to go. I was afraid I was going to lose it and bawl over everything.”

RELATED STORY: Father with Cancer Miraculously Lives to See Birth of Twin Sons Before Dying: ‘He Was So Happy’

As Larissa prepared for her planned C-section on July 6, Louis Armstrong’s “What a Wonderful World” — a song played at the couple’s wedding — began to play. Then, the song John always sang to their daughter, “Ain’t No Mountain High Enough,” came on.

“His presence was there,” Larissa says.

Larissa named the baby Eliana Joy. Ellie is now a happy, peaceful 7-month-old, who is always in Larissa’s arms.

She says she sees her husband — whom she says is the smartest, most moral, artistic, kind man she has ever met — in both her daughters. (Larissa says she sees his marathon-runner appetite in their oldest daughter!)

The only family she has in town is her husband’s 82-year-old mother who fell and broke several bones and now lives in an assisted living facility. Now her guardian, Larissa picks her mother-in-law up once a week to spend time with her grandchildren.

At night, after putting her daughters to sleep, Larissa works on a scrapbook of stories, pictures and memories of the children’s father.

“I want my girls to know their story. To know how much I love them, and how much John loved them,” she tells PEOPLE. “While he was sick, we were going to write stories to Emma and this next child. But he got too sick. So now, I’m his voice.”

“Both my girls have a father,” she says. “I would love for them to have a dad.” 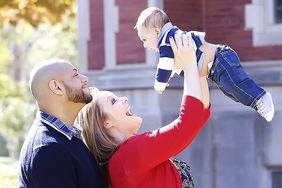