A South Dakota woman says she’s lucky to have survived after a freak accident involving a lawnmower left her fighting for her life with a gaping hole in her neck.

Kendra Jensen says she was more than 30 feet away from her husband, Andy Jensen, as he mowed the lawn at their Bridgewater home on July 11. Still, a sharp object managed to fly from the lawnmower and slice Kendra’s neck, narrowly missing her carotid arteries, “trachea, vocal cords and everything important,” she wrote in a Facebook post the night of the incident.

“When I walked out the door, I started picking up a couple of toys, stood up, and that’s when I was hit. I thought that I got hit by a rock. It felt like something hit me, and then fell off me,” she told ABC affiliate KSFY. “I didn’t know that my neck had been sliced open. I was immediately like, ‘That hurt,’ and so I grabbed my neck. That’s when I realized I was bleeding, and it was wet. I freaked out.”

Andy quickly grabbed his trauma bag, stuffed the wound with gauze and wrapped the area as they waited for an ambulance to arrive, Kendra continued in the post.

“She’s going to bleed out in front of me. That’s the very first thing that came to my mind,” Andy told KSFY. “I just put my thumbs in it and started going with the gauze.”

She was taken to a local hospital where doctors stitched the wound and told Kendra she was lucky that the object missed her trachea and one of her carotid arteries, NBC affiliate WTHR reported.

Kendra shared photos of the wound on Facebook, including pictures of doctors stitching her skin back together. The post has been shared 23,000 times.

“My intent on posting what happened to me was to update my family and friends about it,” she said, according to CBS affiliate WKBN, noting that she’s faced some backlash as a result of the post.VIDEO: Family ‘in Shock’ After Baby Apparently Slips from Grandfather’s Hands & Falls from Cruise Ship

“The ones that keep making comments that are like, ‘You shouldn’t have done this,’ or just shaming my husband like it was his fault,” she said. “He didn’t even know I was outside.”

A friend, Cassie Thomas, has set up a GoFundMe page to cover Kendra’s medical expenses. 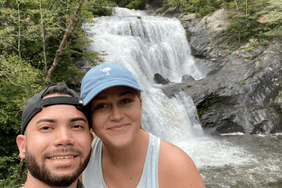