In addition to being cousins, the children will also be genetic siblings

The Salyers are seeing double!

The couples, who first made headlines when appearing on TLC's Our Twinsane Wedding, shared the news in a Baywatch-themed Instagram post.

“Guess what!!?? BOTH couples are pregnant! 🤰🤰,” they wrote alongside a photo showing Josh and Jeremy dressed up as lifeguards while Brittany and Briana showed off their baby bumps in one-piece bathing suits that read “Baby Watch.”

“We are thrilled and grateful to experience overlapping pregnancies and to share this news with you all!” the caption continued. “Our children will not only be cousins, but full genetic siblings and quaternary multiples! Can't wait to meet them and for them to meet each other!”

The baby news comes almost exactly two years after the couples tied the knot in a joint ceremony at the 2018 Twins Days Festival in Twinsburg, Ohio — where they had first met a year prior.

They were married by identical twin ministers in the ceremony themed “Twice Upon a Time.” At the time, Brittany, who is married to Josh, told PEOPLE that they were excited to all live in the same house and raise their children together.

“When we have children, my and Josh’s children will be genetic siblings to Briana and Jeremy’s children,” she said. “Even though they’re cousins, they’re technically genetic siblings. We imagine it will be like two moms and two dads all raising our families together.”

The sisters have long been immersed in twin subculture, dressing alike, double dating and considering themselves “two halves of a whole,” so there wasn’t much trouble when they set out to plan their joint wedding, they said.

“It’s really been a fairy tale come true. Marrying twins is something that’s very important to us,” Briana said, describing the ceremony as a “double fairy tale.”

“Even when we were little girls I can remember being in kindergarten, knowing that that is what we saw for ourselves,” she said.

“We knew that the chances were incredibly scarce,” Brittany added. “The stars had to align for our dreams to come true. I get to marry the man of my dreams and at the same time I get to look over next to me and see my twin sister marrying the man of her dreams.” 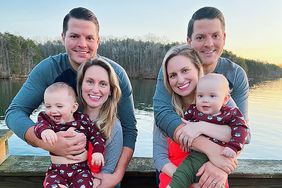 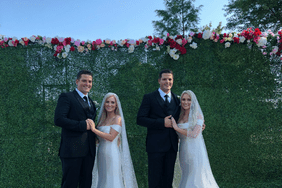 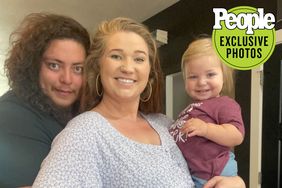