For people who were welcomed into a family via a closed or international adoption, finding their birth family can be an important — but also an emotionally fraught and unpredictable — journey

Angelle Richardson was 18 when she met her birth mother at the New Jersey home of the social worker who helped facilitate her adoption. Richardson's biological mom was being raised by an aunt when she got pregnant at 15; the aunt told Richardson's mother that she must relinquish the baby for adoption.

"My biological mother and I hugged, and she cried," says Richardson, 47, of Philadelphia. "I smiled a lot."

That first meeting on October 31, 1992, included a visit to meet Richardson's younger biological sister at the hospital where she had just given birth.

"My sister, biological mother and I did not know what to say to each other," she says. "It was like the three of us were related, but we knew nothing about each other."

That day 29 years ago launched a loving and complicated relationship that has evolved over time.

"Like all families, we continue to be a work in progress, there are ups and downs," says Richardson, a licensed professional counselor and an assistant professor at Thomas Jefferson University in Philadelphia, whose work includes helping adoptees process relationships with their birth families. "But I think that is part of being a family. You keep working and growing with the people you love."

Reunions like Richardson's may be becoming more common among the estimated 7 million Americans who are adopted, with the advent of DNA testing kits and the increase in open adoptions (today, roughly 9 in 10 domestic adoptions are open).

Yet the search for one's birth parents and the reactions it can trigger can be emotionally fraught, filled with many ups and downs. Experts in adoptee/birth reunions have some suggestions for this process. And, advises Richardson, "Everybody's experience is different."

Until 1976, adoptions were closed in the United States, and opening closed records can be challenging. And in the case of international adoptions, it can be difficult (if not impossible) to find birth parents, says Leanne Hershkowitz, a New Jersey-based licensed professional counselor who works with adoptees.

"It's very hard internationally to find any records of any validity that lead you anywhere," she says. "Almost none of my Russian, Eastern European, and Chinese adoptees have connected records."

Hiring a private investigator in these cases could be useful. And for those adopted in the U.S. with open adoption records, one can reach out to their adoption agency to obtain information.

Opening Up the Conversation

Once an adoptee has decided they're ready to meet their birth parent, there are two potentially tough conversations to prepare for: the ones with their birth and their adoptive parents.

Both Richardson and Hershkowitz recommend reaching out to the birth family via written communication, to avoid putting them on the spot. (She also notes that the preferred means of conversation can vary by age: "My younger students prefer a facebook message; in their 30s or 40s, more likely email, and those in their 50s, more likely a phone call.")

And they also both advise being as patient as you possibly can while you wait for a response. "You may want to follow up, but also remember people may have reasons for not answering that have nothing to do with you," Richardson advises. "Their own history or life circumstances could get in the way."

To approach the topic with adoptive parents, both experts suggest having the conversation in person; as Richardson says, you want to be sure your "tone and intent" is clear. If you're anxious about hurt feelings or a negative reaction, you could start with a letter, or have a "neutral third party" like a therapist facilitate the conversation, says Hershkowitz.

Hershkowitz says that many adoptees will have expectations "that you didn't even know you had. That's typically the roller coaster that people go through."

Richardson advises adoptees to temper these expectations and approach outreach with the mindset of, "'I just maybe want to meet this person' or 'I just want to know who they are,'" she says.

"Brace yourself where there may be the possibility of somebody saying, 'I'm not ready,' or 'I don't want to,'" she says.

What Adoptive Parents Want You to Know: Do's and Don'ts

Be Prepared for Difficult Emotions

Richardson says most adoptees have a narrative they tell themselves about why they were placed for adoption, perhaps thinking it's their fault. "Often the pieces of that narrative may be, 'If I had been good enough, if I had been a great baby, if I hadn't cried, then they would have kept me,' " she says.

"It's really challenging to go into this space," she says, "and try to find those answers."

"You want to move slowly," says Hershkowitz. "Even though they are your birth family, you don't actually know them. You want to be careful; not that they're going to hurt you necessarily, but you want to feel safe and comfortable. The reality is if you've relinquished a child, there's a reason. Usually whatever that reason is, it can still be ongoing."

If they're open to contact, start with a phone call, then meet up for coffee or lunch or dinner at a neutral place. "Then you might visit each other's homes if you feel comfortable," she says. "But move slowly. The flood of emotions can be very overwhelming."

Additionally, emotions of an adoptee and the biological parents can vastly differ, says Richardson: "They may not share the same feelings, have the same expectations, or want the same thing out of the relationship as you do."

Finally, "relationships take time. Just because this person is your child or your parent, does not mean that they will automatically connect to you. It is wonderful if they do, but they may not."

Francy Egan, 23, is a college senior from Montclair, N.J. Adopted when she was 13 from a Colombian orphanage, she'd wanted to reconnect with her biological mother since she was removed from her biological family and placed in the orphanage at 8.

Five years ago, after her adoptive parents hired a private investigator, they found her birth mother. Soon after, Egan, her parents and two younger sisters, also adopted, flew to Colombia for a reunion.

But when Egan and her biological mom met, "I just didn't even feel the connection. It was just like meeting a stranger," Egan says.

"I was able to see the truth of what actually happened and why I actually was put in the foster care system," she says, having learned that her birth mom was impoverished and had severe mental health issues that prevented her from taking care of her children.

"The fantasy that I had got smashed into the floor," Egan continues. "I realized that my whole life was better without her. That was really tough, because I had this fantasy for 10 years, of who she was, and then finally I'm able to see, and it's not what I thought. That hit me really hard for a few months. It was super disappointing."

Egan turned to her adoptive parents, Rachael and Mark Egan, for help getting through this rough time.

Still, says Egan, "I don't regret meeting her. It helped me get closer to my parents here in a weird way." For the first time, she began calling them 'mom' and 'dad.'

Richardson says that some adoptive parents can feel rejected when their child hopes to find their birth family. "They can feel like, 'I don't want to lose you. I raised you,'" she explains.

But on the flip side, preventing their children from seeking birth parents can create even greater distance. "I think there are a lot of adoptive parents who feel like they're doing what's best for the adoptee, and sometimes they're not asking the adoptee what they really need," she says.

Experts advise seeking the help of a therapist or intermediary "to step in and ask the questions and facilitate that conversation because emotions can be very, very high," says Richardson.

Her adoptive mom, Rachael Egan, is grateful that "we were able to give Francy's mother the comfort of seeing and holding her child again and allowing her to know Francy was loved and cared for and safe."

Despite Francy's disappointment, "I feel like anybody who is thinking about it, or wants to have more answers, they should definitely do it, it gives you relief," Egan says. "It's going to be a roller coaster in the beginning. No doubt. But at the end of the day, you might feel more at peace with yourself. You get to appreciate your life more."

About to Enter the Adoption Maze? Be Warned: Getting Through Wont Be Easy

Baby-Selling Ring: Looking for Their Mothers 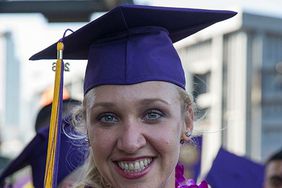